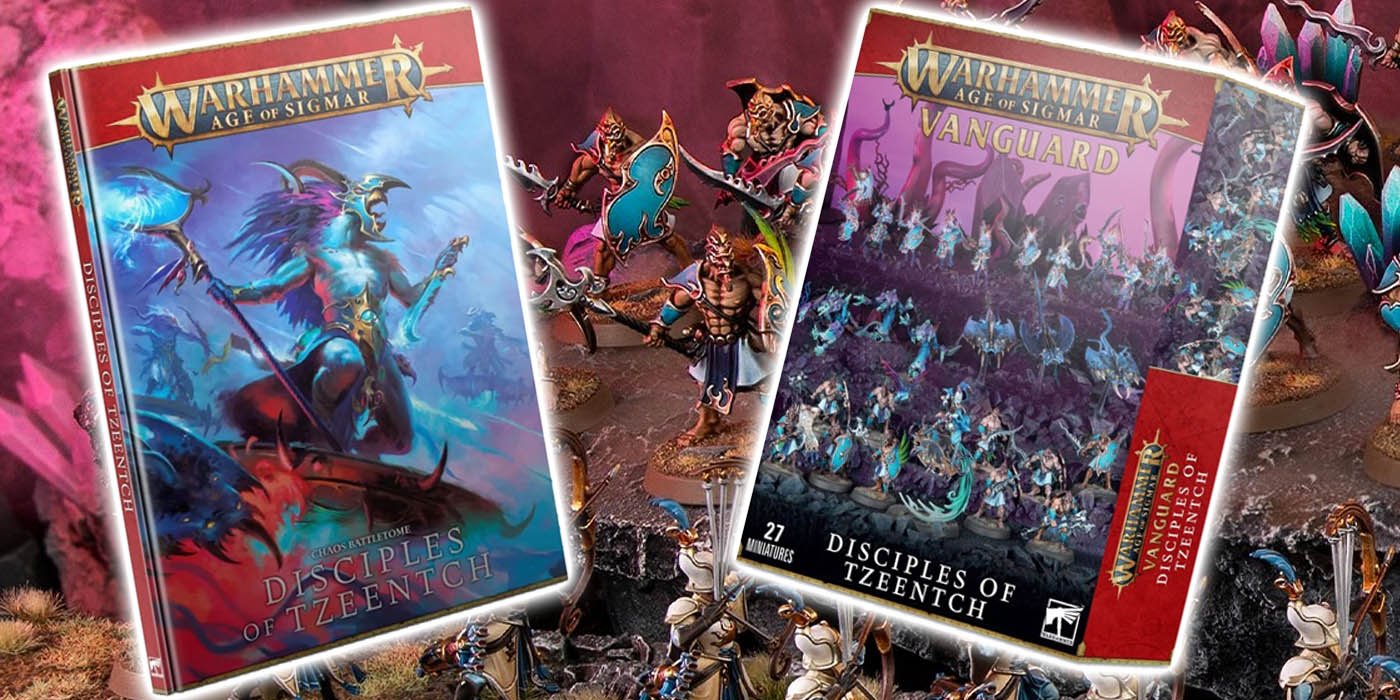 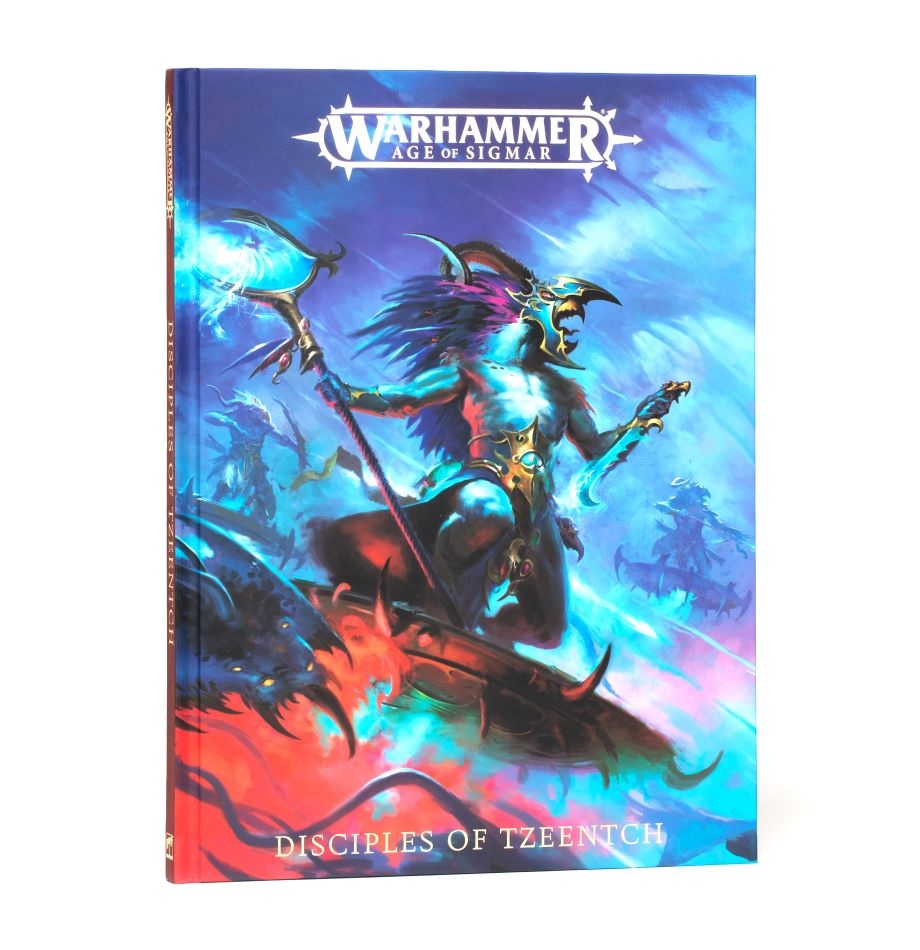 This limited edition Battletome: Disciples of Tzeentch comes with a soft-touch cover, red ribbon bookmark, gold page borders, and gold foil. It is limited to 700 individually numbered copies, each a grand grimoire worthy of Tzeentch himself.

This battletome contains a one-time code to add the book to your digital library in Warhammer Age of Sigmar: The App. 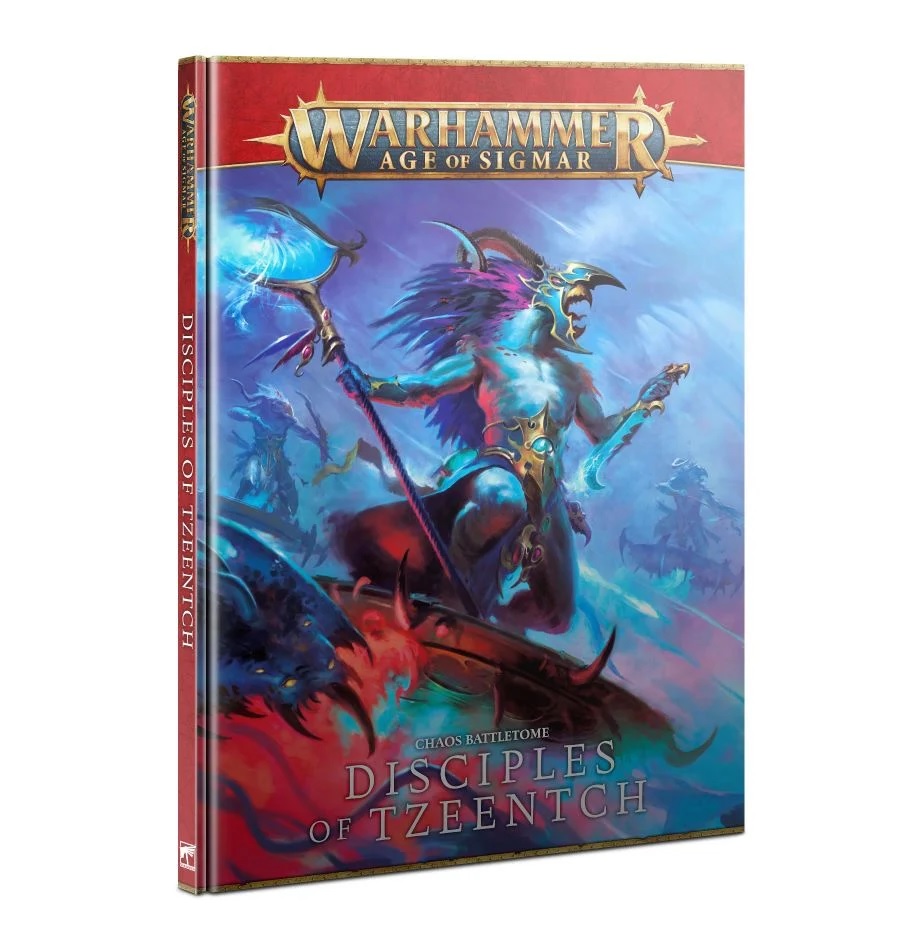 A storm of mutating magic heralds the Disciples of Tzeentch, supernatural warriors in the service of the Changer of Ways, a mercurial deity who revels in anarchy and manipulation. Among their ranks can be found bird-headed beastmen, sputtering fire-breathing demons, and cruel cultists adorned with unholy tattoos. With soul-burning spells and howling enchantments, these amorphous arcanists seek to unleash the madness of pure Chaos upon reality, reshaping flesh and earth alike to the delight of their fearsome patron.

This book contains everything you need to know to lead the arcane followers of the Changer of the Ways in your games of Warhammer Age of Sigmar. Learn how Tzeentch’s corrupting touch manifests itself in the realms and their inhabitants, discover the devoted cults that have given their minds and bodies to the Great Mutator, and face off against the daemonic hordes born of magic itself.

– A mercurial maelstrom of background information on the Disciples of Tzeentch, including their nearly unfathomable plans, how their cults spread across the Mortal Realms, and legendary figures like Kairos Fateweaver.
– Tons of amazing artwork demonstrating the mutable majesty of Tzeentch
– 31 warscrolls and pitched battle profiles for worshipers of Tzeentch, from the braying herds of Tzaangor to the spell-stealing Curseling
– Rules for the top 8 Change Covens, plus command traits, artifacts of power, spell lore, and battle traits like Masters of Destiny and Arcane Armies
– Path to Glory campaign rules that task you with gathering resources for arcane rituals, plus warscroll battalions and air battle rules to use in narrative play.
– Balanced gameplay content including 4 grand strategies and 5 battle tactics, as well as a core battalion for Kairos Fateweaver’s personal coven
– A display of kaleidoscopic Disciples of Tzeentch miniatures in a prismatic explosion of colour, along with guides to painting them yourself.

This battletome contains a one-time code to add the book to your digital library in Warhammer Age of Sigmar: The App. 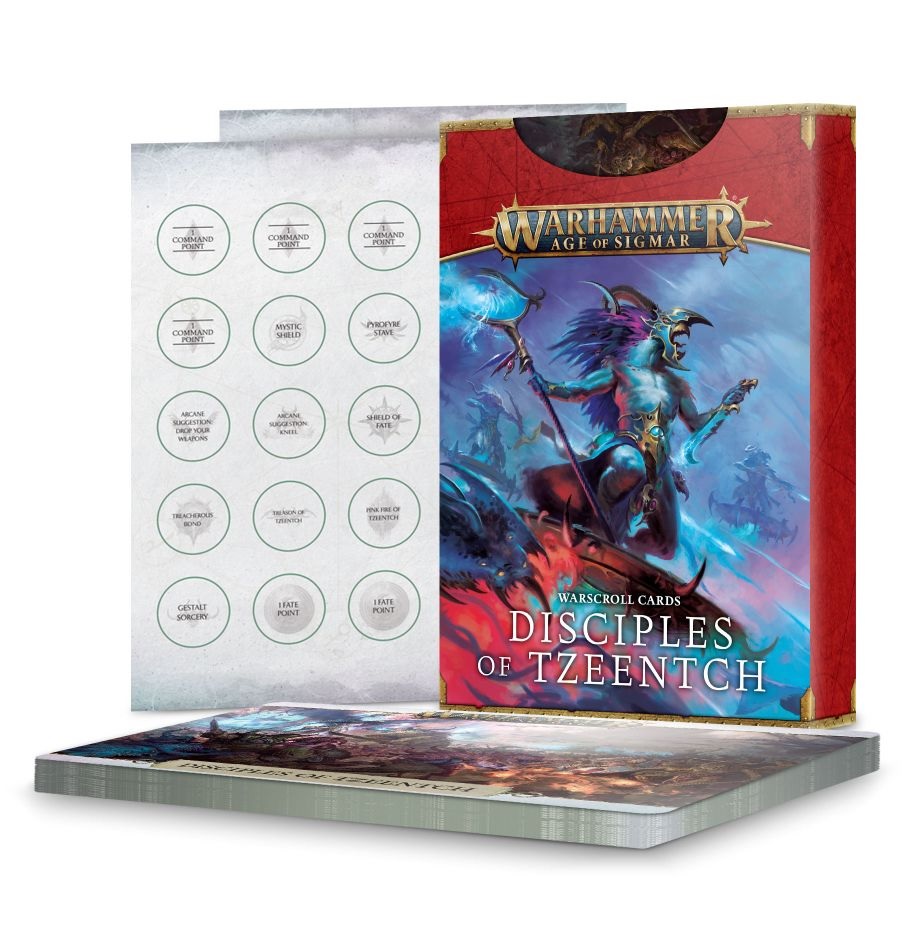 Shape the fate of the Mortal Realms however you wish using these essential reference cards to keep up with the pace of the game. This pack includes warscrolls for each unit and Endless Spell in Battletome: Disciples of Tzeentch. You’ll also find 35 tabs to help you keep track of your army’s abilities, artifacts, command points, and spell effects, along with your grand strategies and unique battle tactics.

In this package you will find: 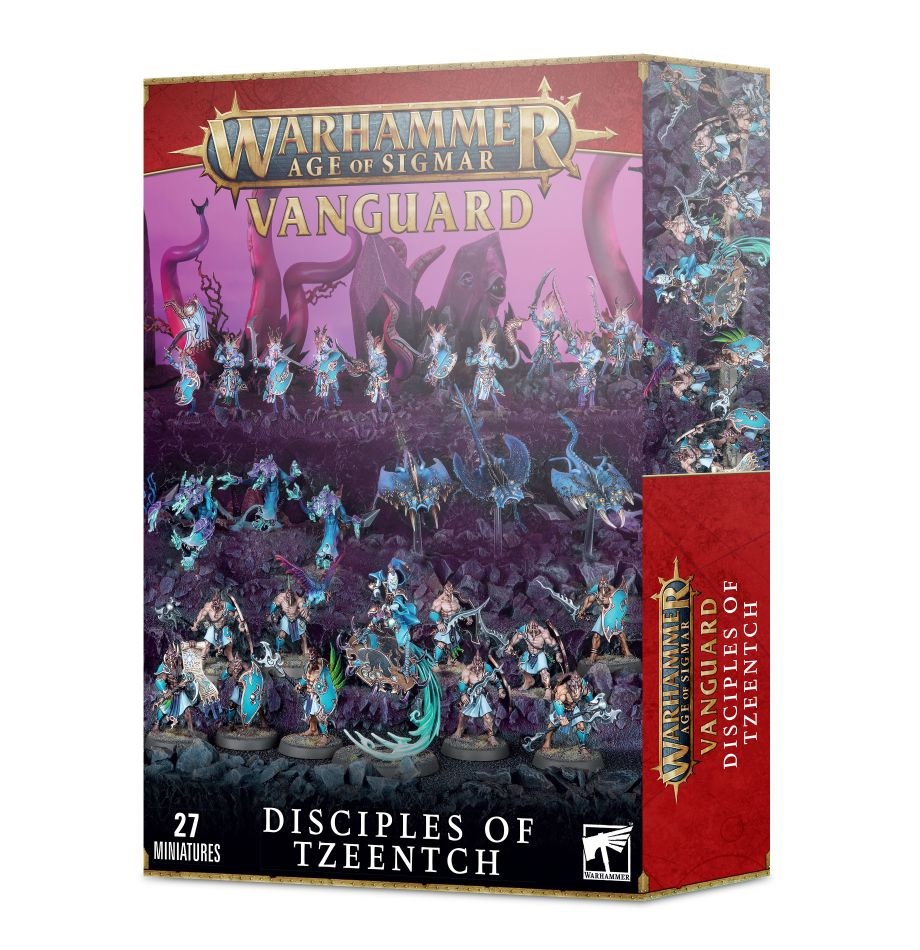 Worshipers of the Changer of Paths seek to reshape the Mortal Realms, twisting them into shapes more pleasing to their fickle god. Magisters gifted with sorcery lead the singing Kairic Acolytes to war alongside braying herds of Tzaangor and conjured daemonic entities, leaving a trail of destruction and madness in their wake.

If you’re itching to dedicate yourself to the God of Change, this Vanguard box is a fantastic start to a Disciples of Tzeentch army, or a great way to beef up an existing one, and will save you money compared to buying the contents individually. The box contains a Sorcerer Hero and several Battleline units, providing a complete army in one box to suit a wide range of strategies, keeping your opponents guessing in Warhammer Age of Sigmar.

All models are supplied with their corresponding bases. 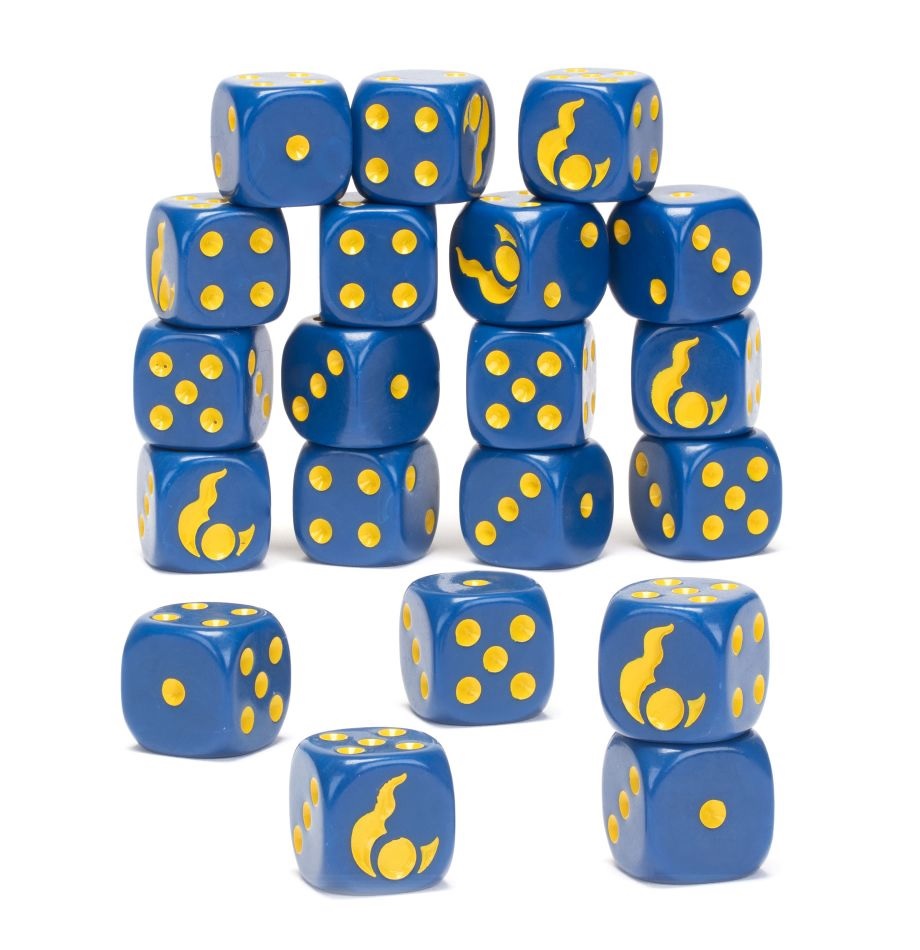 Turn fate in your favor on the battlefield for Tzeentch with these Disciples of Tzeentch themed dice.

This set includes 20 six-sided dice with rounded edges measuring 16mm along each edge. They are cast in a dark blue with yellow nuggets and a Disciples of Tzeentch icon on every 6 faces.

A writer, editor, Texan native, and Austin resident for over 15 years, Adam covers all things tabletop gaming. Which includes Warhammer 40,000, Age of Sigmar, D&D, board games, and everything else that involves dice, boards, cards, and a table. An aficionado, gamer, and collector of miniatures and games, Adam’s current obsession is his Death Armies for Age of Sigmar, his Blood Angels and Tyranids for 40k, and his ever-growing Arkham Horror: The Card Game Collection.