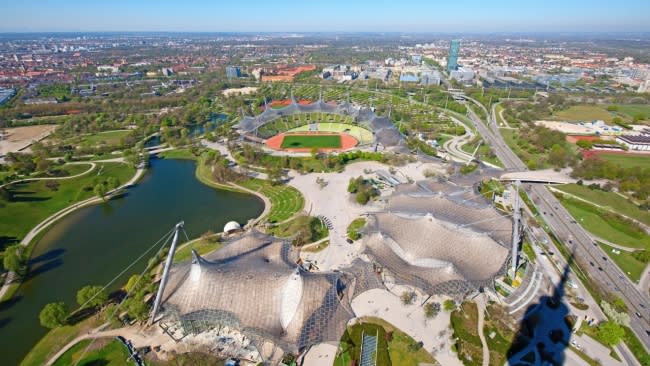 Fifty years ago, an air of vibrant optimism surrounded the 1972 Munich Olympic Games. The athletes put on riveting performances and the event continues to benefit the local community to this day. However, the Games were overshadowed by a tragedy: a terrorist attack against the Israeli team that shocked the entire world.

The Games brought together 7,134 athletes from 121 countries to compete in 195 events, a record at the time. Notable performances included American swimmer Mark Spitz, the first athlete to win seven gold medals at one edition of the Games, and Soviet gymnast Olga Korbut, who wowed the crowd with unique routines never seen before.

Munich 1972 also showcased a confident and capable host recovering from the trauma of World War II, enchanting visitors with a new spirit of openness, joy and modernity.

The world watched, admiring the stunning architecture of Munich’s Olympic Park, most notably the iconic venues’ tented roof structure, which echoes the Bavarian Alps beyond. His pedestrianized Olympic Village was a revelation in urban planning, placing people and streets above motorized traffic and underground car parks, at a time when cities were configured around the car.

“The Munich Olympics in 1972 represent the new Germany of the post-war period,” IOC President Thomas Bach said at a recent event to celebrate the 50th anniversary of the Games. “The architecture and conception of these Games reflected the spirit of openness, frankness and joie de vivre down to the smallest detail. With a unique design of the Olympic Park and the stadium, the architect Günter Behnisch exactly captured this spirit of the times. He deliberately avoided borders and barriers of any kind in order to focus on the unifying power of the Olympic Games.”

Even the pictogram signaling system, designed for the Games by a team led by Otl Aicher, was innovative, but fully in keeping with the Olympic ideal of understanding that transcends languages ​​and borders.

“Understanding across linguistic and cultural borders is one of the hallmarks of the Olympic Games,” said President Bach. “A nice expression for this was found in 1972 in Otl Aicher’s pictogram system, which he designed specifically for these Games. These pictograms are still innovative today.”

Olympic fencing champion, President Bach recalled the sporting triumphs of his countrymen and women in Munich in 1972: Heide Ecker-Rosendahl’s long jump; Ulrike Nasse-Meyfarth, who set records by continually raising the high jump bar; and the “golden hour” in which Hildegard Falck, Klaus Wolfermann and Bernard Kannenberg won three gold medals in athletics. The Munich public also celebrated the success of outstanding GDR athletes, he added, citing legendary swimmer Roland Matthes and the five medals won by Karin Büttner-Janz, “the most successful German athlete at these Games”.

Against this backdrop and the sporting achievements of the athletes in the first week of the Games, the terrorist attack on September 5 shocked the Olympic Movement and the entire world. Eleven Israeli athletes, coaches and a sports official and the German police officer who were killed are commemorated by the park’s “Einschnitt” (incisions) monument, and with a plaque outside the Village apartment where they were taken hostage.

Speaking at a ceremony celebrating the 50th anniversary of the Games on July 1, 2022, IOC President Thomas Bach recalled the tragic events of 1972:

“Even today, the brutal attack on the Israeli team fills us with horror and disgust, with shame and horror. For many of us, it’s one of those moments in life when we know exactly where we were when the news broke. I myself followed the events on television with incredulous horror. The terrible and inhuman images continue to have an effect on me to this day.

“The attack on the Israeli team was at the same time an attack on the entire Olympic community and its values. (…) Despite this cowardly attack, the Israeli NOC [National Olympic Committee] has never turned its back on the Olympics. Israeli athletes have continued to compete and embrace the unifying power of the Olympic Movement.”

The Games fulfilled the ambitions of the planners and the elite athletes. City authorities already had ambitious plans for urban improvement on the drawing board when the Bavarian capital was named the site of the Games of the XX Olympiad in April 1966, accelerating investment and development in preparation for the Games.

Covered in rubble, the site of the former Oberwiesenfeld Airport was transformed into Munich’s Olympic Park, complete with nine sports facilities, an artificial lake, meadows and lawns, and its Village landscaped to resemble the Alpine foothills. The city’s roads and public transportation were improved with a new S-Bahn suburban rail system, the first two subway lines, and new motorways and ring roads. Other developments included underground parking garages, schools, a shopping center and housing, as well as the restoration of Munich’s old town.

After the Games, Munich soon established itself as one of the world’s most desirable cities to live in and a magnet for business and investment.

The Munich Olympic Park remains a compelling example of how to create a lasting legacy. The Olympic Village, which welcomed athletes from around the world at Games time, is credited with inspiring the sustainable aspects of the London 2012 Games, including the priority given to green spaces, playgrounds and access to public transportation.

Today it is home to some 10,000 residents and is ideal for young families with its quiet terraces, green spaces and easy access to local shops and services. The apartments and bungalows of the former Women’s Village have been equally attractive to students. The “Olypark”, as it is known by its young residents, also has a strong sense of community and an active residents’ association, established shortly after the Games.

With the unique concentration of different events and entertainment venues, as well as the corresponding offers, the Munich Olympic Park has become one of the most important centers of its kind. Around 14,800 events have been held in the Park since 1972. Around 221.5 million registered people have attended sporting, cultural and commercial events, and have made use of the Olympic Park’s leisure and tourism facilities. Beyond its international reputation as a center for events and entertainment, the Olympic Park also represents an important source of economic potential for the Bavarian capital.

Germany has also enjoyed a significant legacy in sports performance and science for decades. The foundation of the Stiftung Deutsche Sporthilfe (German Sports Aid Foundation) preceded the 1967 Games, and three years later the creation of the Bundesinstitut für Sportwissenschaft (Federal Institute of Sports Sciences) followed.

These have had a lasting impact, helping to maintain Germany’s position as a leading sporting nation. Munich 1972 saw the introduction of a standardized doping control protocol, with drug tests in all sporting disciplines.

The golden jubilee evokes many memories in Germany and throughout the world. It is fitting that the centerpiece of the year-long celebrations was the largest multi-sport event in the Munich Olympic Park since 1972, with some 4,700 athletes from 36 countries competing in the Munich 2022 European Championships between August 11 and 21, in nine disciplines and Olympic sports. : athletics, beach volleyball, sprint canoeing, cycling, gymnastics, rowing, sport climbing, table tennis and triathlon.