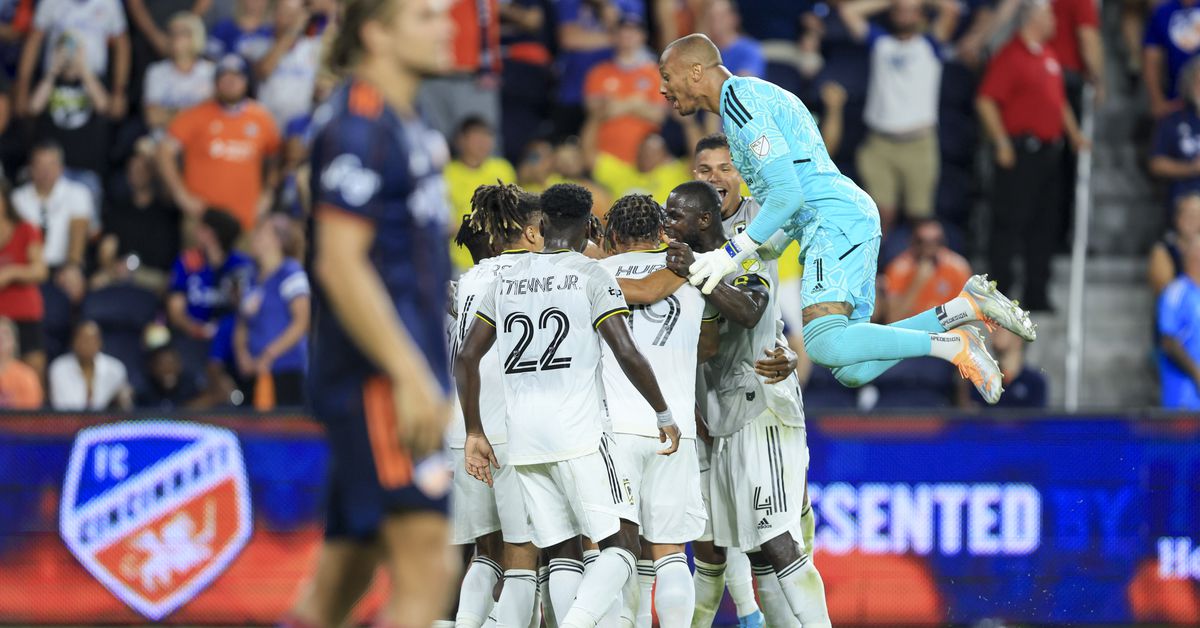 When the Columbus Crew arrives in Cincinnati, there’s only one thing to look forward to: mayhem. That’s what happened last weekend when the Crew essentially stole a tie on the last shot of the game, drawing FC Cincinnati 2-2.

While the ending was exciting for the crew (and demoralizing for FCC), Black & Gold fans wonder how much one kick can and should impact their view of how Columbus played. After all, there were more than 95 minutes in which there were certainly fights.

We review the performances of the Crew in the TQL Stadium

Eloy Room (6.0) – Room didn’t play Brandon Vasquez’s first game very well, getting beaten at the near post in an admittedly difficult 1-on-1 situation. The keeper also spilled a shot in the 45the minute that was taken advantage of by an offside Alvas Powell. While he did make a couple of good saves, Room’s ability to control the ball and the baseline were not up to his usual high standards.

Will Arenas (6.5) – In his first start for Black & Gold, Sands played well in relief of the injured Pedro Santos. While he continues to show his individual ability, his ability to generate crosses to the penalty area, where Santos excels, was lacking against Cincinnati. Sands could get more opportunities with Santos out.

Jonathan Mensah (6.5) – With Columbus looking for a goal for most of the game, Mensah was continually asked to push high up the field. This took the center out of position for him, particularly on Vasquez’s breakaway goal, where he couldn’t get back in time. Because of this offensive emphasis, Menah’s defensive contributions were minor, but he did contribute a shot that almost found the back of the net.

Milos Degenek (6.0) – Degenek also spent much of the game in the Crew’s attacking half, helping to look for a goal, which was evident from the ball he put into the box that led to the late equalizer. The Australian international had a mixed performance on Saturday, displaying his defensive skills but also his lack of pace in key situations.

Esteban Moreira (8.5) – even before his goal in stoppage time, Moreira had a solid game at right back, helping to create that side of the pitch. His night came with a secondary assist on the opening goal and his come-out goal to tie the game. However, Moreira was slow to come out on Cincinnati’s second goal and ended up deflecting the ball into the back of the net.

Darlington Nagbe (7.5) – While it may be overlooked due to late-game heroics, Nagbe played a big part in securing a point for the Crew, clearing a shot off the goal line just before stoppage time. Cincinnati did its best to limit Nagbe’s ability to control the midfield, but the American central midfielder continued to fight for possession and worked both offensively and defensively. He finished the game tied for second-most touches on the team and led with five interceptions, as well as contributing three clearances and a blocked shot.

Aidan Morris (5.5) – It was a difficult night for Morris in his return to the starting 11. He was involved in both of Cincinnati’s goals and also made several poor passes that directly led to scoring opportunities for the opposition. However, Morris was part of the style of committee defense that Black & Gold played once they scored a goal. Morris covered more ground than Artur would have had in midfield, but he presses less in attack and made too many poor decisions.

Kevin Mill (5.0) – Molino’s first start of the year was lackluster compared to his impact off the bench last game against Atlanta United. Instead of the wide play of other wingers, Molino floated into midfield, a tactical shift in the Columbus build. This didn’t work out, however, as Molino looked bad with his teammates, connecting on just 66 percent of his passes.

Lucas Zelarayan (6.0) – Always an enigma, Zelarayán continues to show moments of brilliance and moments of frustratingly poor giveaways that can take the Crew out of attacking moments and take the momentum out of the offense. Once a wizard at set pieces, Zelarayán has struggled to stand on dead balls of late and did so against at TQL Stadium. The Black & Gold could have used more impact from their No. 10 on Saturday night.

Luis Diaz (6.5) – It was clear that Columbus wanted to use Diaz’s pace to attack Cincinnati on the left flank. Díaz was able to work several excellent attacks in the offensive third. However, he was never able to create enough separation and never had the targets in the penalty area to produce a dangerous cross. Replacing him in ’78the minute was a product of how much the Crew was using their pace to create chances.

Cucho Hernandez (7.0) – Hernández had moments of brilliance, including his assist on the first goal. His work rate, exhibited by his constant pressure on opposing defenses, is an undiscussed part of how good he is and significantly helped Black & Gold gain possession in the second half. Too often, though, Hernandez is surrounded by three players, making it hard for him to make an impact. However, the note post game celebration It deserves a 10 rating.

Derrick Étienne (7.0) – Etienne put his mark on the game 12 minutes after coming off the bench, nimbly deflecting a headed cross into the back of the net. The winger brought a spark off the bench and reminded Columbus fans why he has been the main starter all season. Was he offside in goal? The world may never know.

Yaw Yeboa (6.5) – Yeboah came into play in ’78the minute, but could not make an impact. The Ghanaian winger came on as the team was looking for a goal, but his contributions were minimal as he only finished with 12 touches on Saturday night.

Erik Hurtado (N/A) – Hurtado’s substitution was clearly a case of pushing all the chips on the table, substituting a more defensive player to get more attack. Hurtado did not make much of an impact in three minutes with only four touches on the ball.

Mohammed Farsi (N/A) – Farsi was late to the game in relief of Sands and was a useful safety defender for the team. However, he wasn’t on the field long enough to assess his game.

Caleb Porter (6.0) – This game saw the good, the bad and the ugly for the Crew’s head coach. He is clearly a passionate coach who inspires fans and players alike to dig deep and continue to compete. But while the two comebacks were enjoyable, this wasn’t Black & Gold’s best performance. Columbus spent most of the game on defense and could easily have gone without a point. However, The Crew did it and both credit and blame goes to Porter.