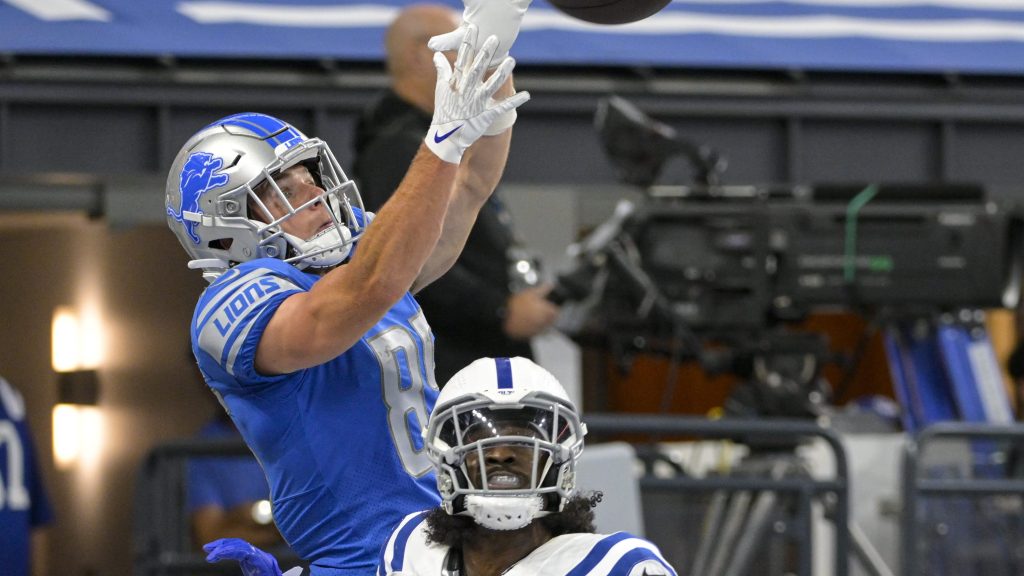 The Detroit Lions head to Pittsburgh for their third and final game of the 2022 preseason.

The final preseason game is the last chance for many players at the back of the roster to prove they have what it takes to succeed in the NFL. Teams tend to rest their starters in favor of taking a deeper look at their depth players.

There are several Lions players who have impressed during training camp and the first two preseason games who should make a big presence against the Steelers. Here are five players to watch in this matchup:

There hasn’t been a player this year who’s made more of a name for himself than wide receiver Tom Kennedy.

The former undrafted free agent is now in his fourth preseason with Detroit and has put up impressive numbers the past two games. Kennedy has 13 receptions for 128 yards and two touchdowns.

Detroit’s wide receiver room is almost set in stone with Amon-Ra St. Brown, DJ Chark, Josh Reynolds and Kalil Raymond sitting at the top of the depth chart. As of now, Kennedy is competing with Quintez Cephus and Trinity Benson for just one or two spots on the list.

Those final spots will not only be determined by performance on offense, but also by ability to contribute on special teams. Kennedy has been used by the Lions as a return specialist in the past and recently as a punt and kickoff defender.

One player who has really slipped under the radar this offseason is tight end Shane Zylstra.

Zylstra has had a quiet good training camp while vying for a role as TJ Hockenson’s understudy. His camp started off strong as several tight ends missed early practices and he got a chance to represent the first team offense.

After going undrafted last season, Zylstra spent most of the year on the Lions’ practice squad but was called up for four games.

He is a versatile player on offense who can fill tight end roles as a blocker and receiver, while also being able to play the backfield in a fullback-type position.

The Lions appear poised to draft three or four tight ends, and Zylstra is starting to look more like a candidate for one of those roles. His performance on offense and on special teams against the Steelers will be his last audition for a roster spot. If not, he’s pretty much a lock on the practice team.

Another rookie who has legitimately turned heads during training camp is Demetrius Taylor.

The undrafted free agent out of Appalachian State has done his best to crack the 53-man roster as a deep interior defensive lineman.

Taylor had his way with perennial Pro Bowler Quinton Nelson during joint practices with the Colts and followed that performance by being a constant disruption to his offensive line during preseason play.

Taylor looked good against the run and can put pressure from inside the line. As of now, he is in direct competition with Jashon Cornell, Bruce Hector, Eric Banks and Isaiah Buggs for just one or two spots on the final list.

He should get some long looks defensively against the Steelers in Game 3 of preseason.

Eze has had his problems during the preseason. The Nigerian native, who didn’t even know what soccer was before coming to the United States, quickly learned how different the level of play is from his time in Memphis.

Eze should get second-team reps at left tackle behind Dan Skipper. He’s going to have to perform really well to earn a spot on the roster, but the practice squad seems like a likely option.

This year’s seventh-round pick, Lucas was expected to have an uphill battle to make the Lions’ final roster.

While he has had an impressive training camp, he has made some small mistakes in the preseason. Against the Falcons in Game 1, he dropped an interception that could have sealed a win for Detroit.

AJ Parker is the starter at nickel defensive back and is expected to start there again this season, but behind him there is some competition between veteran Mike Hughes and Lucas.

Lucas has caught the attention of his coaches and has shown that his five years at Arizona State have prepared him for the league. He now has one more game to show that he can stay as Leon.