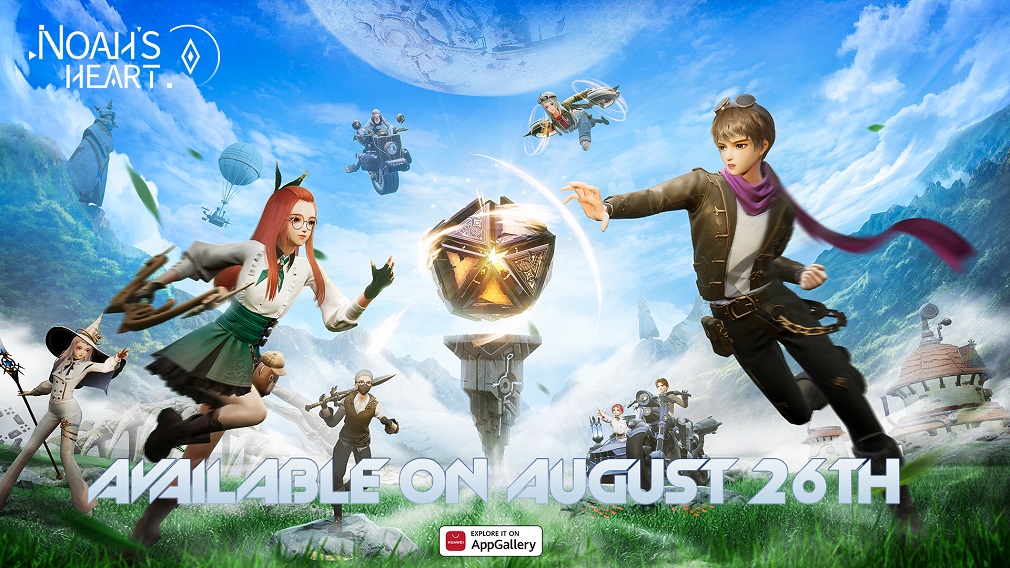 Developed by Archosaur Games, Noah’s Heart is the sequel to the beloved Dragon Raja. The game is now available for download on all Huawei devices, with an exclusive offer for AppGallery users.

Available to download from August 26, 2022, the game will be translated into five languages ​​across Europe (English, French, German, Russian and Portuguese).

At the event, gaming influencer Kurono will demo the game on-site at Gamescom, while Noah’s Heart will also be available for attendees to play on Huawei smartphones and tablets in the gaming zone at the Huawei booth. (Hall 7.1, Stand C21) .

Gamers from around the world are invited to join their friends and explore Noah’s stunning planet, with an exclusive welcome offer for Huawei customers (for offer details, see below).

Embark on a bold new adventure in Noah’s Heart

On Planet Noah, you can challenge dungeons with friends, compete with guildmates in Guild Contests, or just visit your friends’ houses for a chance to relax. With its comprehensive guild system, Noah’s Heart ensures that you never have to go it alone if you don’t want to.

Players have continuous access to an entire planet that they can explore at will, without borders or obstacles. If you pick a direction and keep running, you end up circumnavigating the entire planet, traversing a wide variety of terrain, including ice fields, deserts, rainforests, and more. You can travel on foot, make use of a boat, a horse or even a jet pack.

To help you become a more formidable fighting force, players can squad up with dozens of Historical Ghosts and fight side by side with them, bonding to discover more about their unique stories.
In Noah’s Heart, you also get to choose from a selection of weapons at the start of the game, and these replace the traditional MMO classes. Weapon loadouts can be changed later in the game, unlocking a wide range of customization options in combat.

Archosaur Games is dedicated to creating a welcoming and active community on social media. Their most recent Nova Star Selection Contest hosted on Discord enjoyed a positive reception, with over 10,000 players participating. They also want players to help shape Noah’s heart. Archosaur previously invited players in the community to rename monsters in the game, with even more opportunities to make player voices heard in the near future as well.

AppGallery: Bringing the Best Gaming Experiences to Millions of Consumers Around the World

A partner of choice for leading game developers such as Archosaur Games, Gameloft, Ubisoft, IGG and many more, AppGallery offers a wide range of game genres for all types of gamers, from Action to Arcade, Puzzle, Multiplayer, Role. -Playing, and more. There are countless high-quality games available on the platform, including Asphalt 9: Legends, Might & Magic: Era of Chaos, Lords Mobile, Garena Free Fire, Dragon Tail: Hunter World, and now Noah’s Heart.

With a strong emphasis on the consumer experience, AppGallery is intuitively easy for gamers to use and comes with a range of the best apps and deals, resulting in a net satisfaction score increase of over 20% among gamers. users during 2021.

Additionally, AppGallery has enjoyed incredible growth over the last 18 months, firmly establishing itself as one of the top 3 app distribution platforms globally. The number of apps added to AppGallery during 2021 increased an impressive 147% year over year, now with more than 580 million monthly active users worldwide.

Dr. Jaime Gonzalo, Vice President of Huawei Mobile Services Europe, said: “Following the successful launch of Dragon Raja on the AppGallery last year, we are delighted to add Noah’s Heart to our growing list of games. We particularly like this title, because it’s the kind of game that allows for a fully immersive experience, from fast-paced battles with phenomenal monsters to hours of relaxing exploration that reveals territories and quests.”
“As we look to the future, we are excited to further expand our game offerings, including our partnership with Archosaur. We are pleased to announce that the social simulation, Life Makeover, will launch soon from Archosaur Games on the AppGallery.”