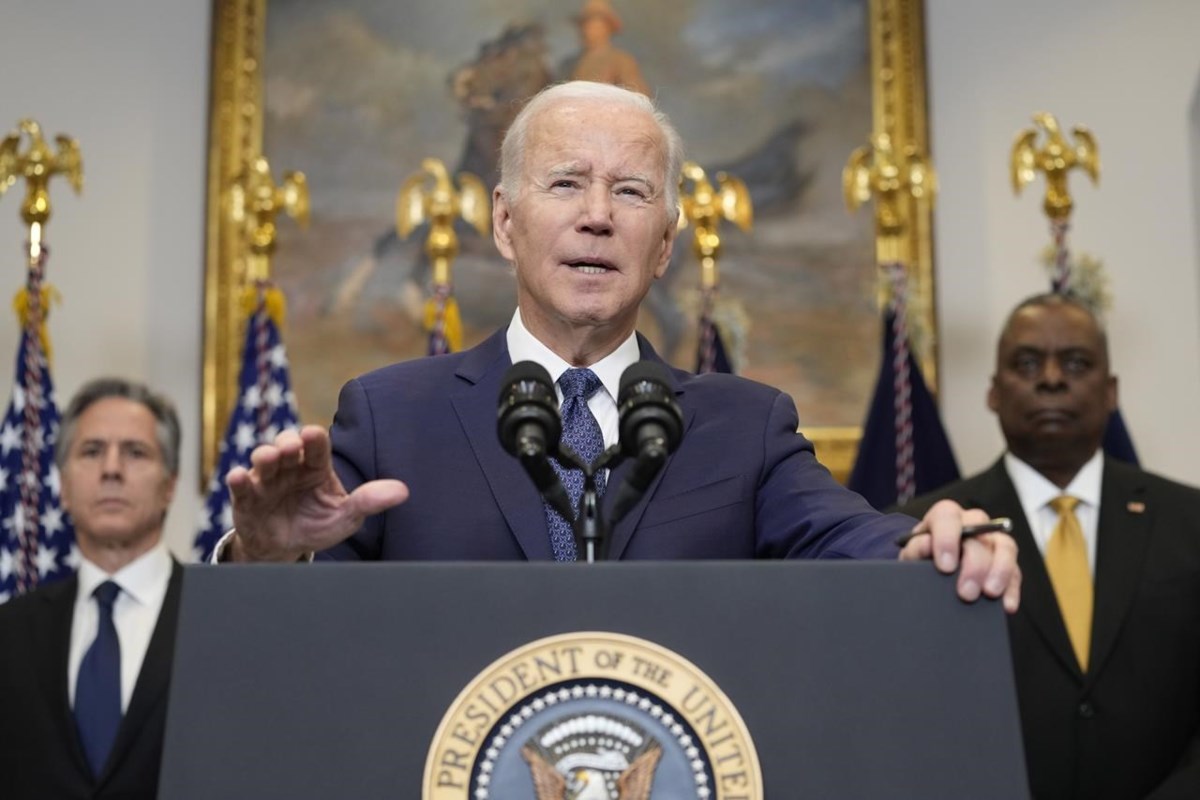 WASHINGTON (AP) — President Joe Biden announced Wednesday that the United States will send 31 M1 Abrams main battle tanks to Ukraine, reversing months of lingering arguments that the tanks were too difficult for Ukrainian troops to operate and maintain. The United States

WASHINGTON (AP) — President Joe Biden announced Wednesday that the United States will send 31 M1 Abrams main battle tanks to Ukraine, reversing months of lingering arguments that the tanks were too difficult for Ukrainian troops to operate and maintain.

The US decision came on the heels of Germany agreeing to send 14 Leopard 2 A6 tanks from its own stock. Germany had said that the Leopards would not be sent unless the US put its Abrams on the table, not wanting to provoke Russia’s wrath without the US similarly committing its own tanks.

Biden said that in total, the European allies agreed to send enough tanks to equip two Ukrainian tank battalions, or a total of 62 tanks.

“As spring approaches, Ukrainian forces are working to defend the territory they control and preparing for additional counterattacks,” Biden said in his announcement of his decision to send the tanks. evolving tactics and strategies on the battlefield in the very short term.”

The announcement ends a standoff between Germany and the United States. Biden administration officials on Wednesday tried to minimize any friction between the two countries as both revealed their plans.

Both sides had engaged in “good diplomatic talks” that made a difference and were part of the “extraordinary change in Germany’s security policy” on arms supplies to Ukraine since Russia invaded 11 months ago, a senior German official said. administration, who briefed reporters on Wednesday. on condition of anonymity to describe the new tank pack ahead of the announcement.

The $400 million package announced Wednesday also includes eight M88 recovery vehicles, tank-like tracked vehicles that can tow the Abrams if it gets stuck.

In all, France, the UK, the US, Poland, Germany, the Netherlands and Sweden will send hundreds of tanks and heavy armored vehicles to strengthen Ukraine as it enters a new phase of the war and tries to break the entrenched Russian lines.

The US tanks will be purchased through the Ukrainian Security Assistance Initiative, which means it will take time for Ukrainian forces to receive the tanks and be able to deploy them on the battlefield, according to the senior administration official. The Pentagon plans to begin training Ukrainian forces in the system outside of Ukraine soon.

The United States has over 4,000 Abrams in stock. Still, it is not “overstocked,” according to a White House official. The Ukrainian military will have to go through significant preparation to learn how to operate, maintain and sustain the Abrams. It’s a process that will take “a few months,” according to the official, who was not authorized to comment publicly and spoke on condition of anonymity.

Using the aid initiative’s funding route, rather than dipping into existing US reserves, means the tanks are unlikely to be available to Ukraine before Russia’s anticipated spring offensive.

Nechayev said in an online statement that the move “changes the conflict to a new level of confrontation and contradicts the statements of German politicians about their reluctance to get involved in it.”

“We are seeing once again that Germany, like its closest allies, is not interested in a diplomatic resolution of the Ukraine crisis, is determined to permanently escalate it and indefinitely fill the Kyiv regime with lethal new weapons.” the statement said.

Until now, the US has resisted providing its own M1 Abrams tanks to Ukraine, citing extensive and complex logistical and maintenance challenges with the high-tech vehicles. Washington believes it would be more productive to send German leopards since many allies have them and Ukrainian troops would need less training than on the more difficult Abrams.

Biden, in an exchange with reporters, chafed at the idea that Germany, which had refused to provide tanks until the United States agreed to provide its Abrams, forced him to.

“Germany did not force me to change my mind,” Biden said. “We wanted to make sure we were all together.”

Just last week, Under Secretary of Defense for Policy Colin Kahl told reporters that the Abrams is complicated, expensive, difficult to maintain and difficult to train. One thing Defense Secretary Lloyd Austin has been very focused on, he said, “is that we shouldn’t be providing the Ukrainians with systems that they can’t fix, they can’t maintain and, in the long run, they can’t afford, because it’s not useful.”

For the Abrams to be effective in the Ukraine, your forces will require extensive training in combined arms maneuvers (how tanks operate together on the battlefield) and how to maintain and support the complex 70-ton weapon. Abrams tanks use a turbine jet engine to propel themselves that burns at least two gallons per mile regardless of whether they’re moving or idling, which means it takes a network of fuel trucks to keep the line moving.