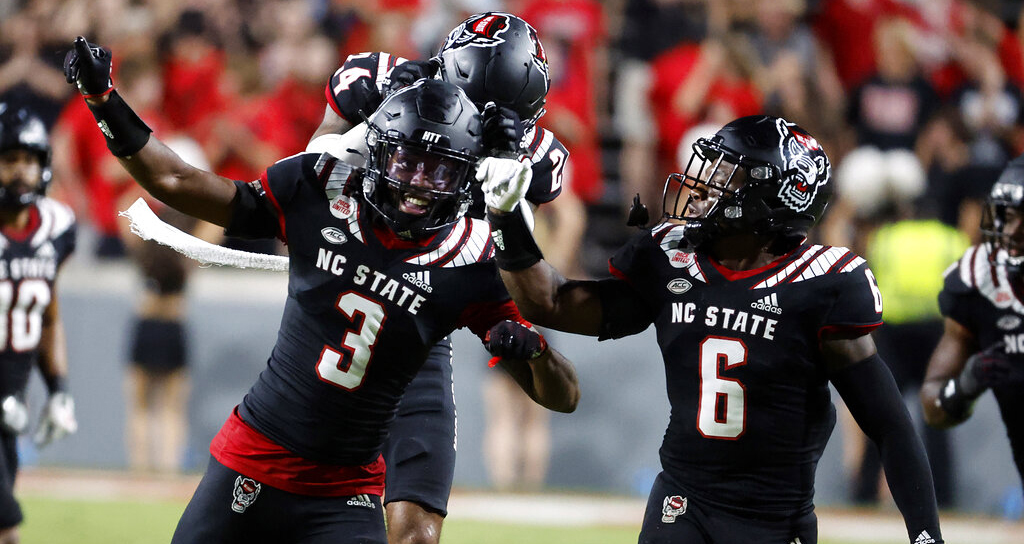 RALEIGH — It’s no secret where to find the heart and soul of the NC State football team. From the D-line to the D-backs, the Wolfpack defense is hungry to lead the 12th-ranked team nationally.

Tough, experienced and with one of the best linebacking trios in the nation, NC State has a formula for success with their defense.

The wolf pack has needed it. Outside of their game against FCS opponent Charleston Southern, NC State’s offense has struggled through the first three games of the season.

So it’s been up to the defense to carry the load, and they’ve been more than up to the task.

The Wolfpack allowed just 12.3 points per game during their 3-0 start, tied for 16th-lowest points in the country. NC State also ranks seventh against the run, giving up just 68.7 yards per game and 3.0 per carry.

NC State lost two key pass-rushers in Daniel Joseph and Levi Jones to start this season, and the defense struggled to get to the quarterback in its first two games.

But the Wolfpack exploded with four sacks in last week’s 27-14 win over Texas Tech, led by CJ Clark’s two sacks against the Red Raiders.

“One of his biggest strengths as a D lineman is his explosiveness off the line of scrimmage,” NC State coach Dave Doeren said of Clark. “You’re starting to see that again. He’s very strong, he’s running through contact, the first sack of him split a double team. I’m happy for him and happy for us because we need him. We need that quick pass from our front.”

Defense also excels at creating turnovers. The Wolfpack is averaging more than two interceptions per game and has forced two fumbles so far this season.

While takeaways are the most notable game-changing plays, the defense also dominates on the third down, helping the Wolfpack gain valuable field position for their struggling offense.

NC State has stopped 73% of opponents’ third-down attempts and has forced a turnover on attempts five times this season.

Perhaps most encouraging is the depth of the Wolfpack’s defense.

“We list those guys ‘O’ for a reason,” Doeren said. “We see Aydan as a starter. I don’t think there is much of a difference there. They each have different skills and things they’re better at, but we see all of those guys as equal when it comes to the rotation they’re going to be in.”

That said, it’s still nice to get guys back at the top of the depth chart, and the Wolfpack got it done with the return of linebacker Payton Wilson.

Wilson, playing his first complete game in a year and a half, led NC State with 10 tackles against Texas Tech and looked like before in his return to the lineup.

“He can play better, but he led us in tackles in his first complete game,” Doeren said. “He can cover ground. The guy is a tremendous athlete. (It’s) just putting another elite competitor back on the field who is very talented.”

This weekend’s upcoming matchup against UConn, which is in the background, has all the ingredients for a loss, but Doeren doesn’t expect that to slow down his team’s effort.

“The good thing for us is that there have been enough examples in college football this year to point out where you don’t have to talk about it,” Doeren said of the rampant upsets earlier this season. “It seems like every week someone loses a game like that.

“We are going to try to improve. That’s what really good programs do. It doesn’t matter who you play, it’s how you play, and this started in the preseason. Our worst enemy is us, no one else on our schedule, and we are going to repeat the exact same talk to them all week.”