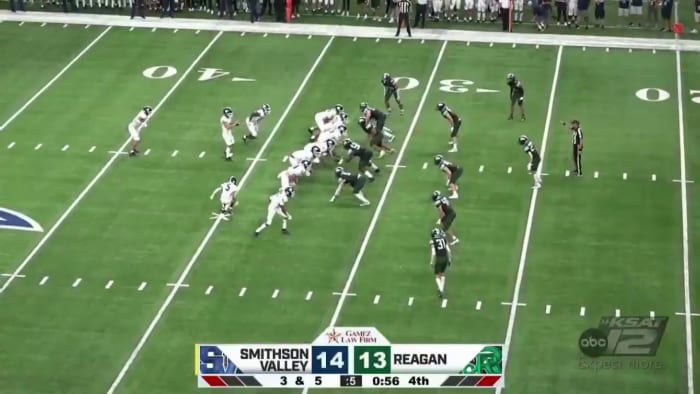 The first game of the triple header, Smithson Valley Rangers vs. Reagan Rattlers, started with a bang and then went to the bottom.

The Comal ISD Rangers defeated the NEISD Rattlers 14-13, in a Class 5A-Class 6A matchup.

“Congratulations to Reagan, they are a good football team,” said Larry Hill, Smithson Valley head football coach. “He took the whole second half, but I’m very proud of our guys.”

A 16-yard touchdown run on one end by wide receiver Freddie Dubose capped a nine-play, 58-yard drive to open the scoring.

Reagan took his first lead of the game with a 54-yard touchdown run on second down by senior Carson Green, taking a 13-7 halftime lead.

Despite the run, the Smithson Valley defense limited Reagan to just 83 total yards in the first half.

The Rangers took the second-half kickoff and immediately charged down the field, using more than five minutes on the clock, but an ill-timed penalty stopped their opening second-half drive.

The Rangers’ running game stayed within striking distance, but a big defensive stop on the fourth-and-seven early in the fourth quarter turned the ball back to the Rattlers.

Gavin Woods, a senior linebacker, forced a fumble that was recovered by Smithson Valley and then their offense was back on track, with runs from Debose and running back Doug Lantz getting the team into the red zone.

Rangers quarterback Chase Senelick scored on a quarterback keeper at first-and-goal to regain the lead.

Reagan, on his next possession, came close to scoring, but a missed field goal squandered his best scoring opportunity.

“My teammates did amazing. I think I did well, but the guys behind me are really the MVPs of this game. Without them, I couldn’t have done what I have done.”

The Rattlers, bi-district finalists a year ago, have a solid defensive line coming back, with four starters behind. Thanks also to the return of running back Carson Green from a season-ending injury (415 rushing yards, 6 touchdowns a year before the injury), Reagan is projected to be back atop the 28-6A District.

“Initially, we had another really good team (to play on), as well as the really good Smithson Valley program,” Reagan head football coach Lyndon Hamilton said. “We were supposed to face Brennan, and things got twisted and shifted a little bit, and Coach Hill and I agreed. And here we are, first round out of the box, bringing the old Town and Country Bowl back to life.”

The Rangers, coming off a 9-3 season in which they were also Division 1 area finalists, will continue to be led this season by Texas A&M offensive line Colton Thomasson. Running back Doug Lantz’s running game (364 yards a year ago) along with experienced defensive linemen Gavin Woods and Jaxon Maynard could help them put together a breakout season.

This year, the University Interscholastic League decided to downgrade Smithson Valley to Class 5A, due to a drop in enrollment.

“The kids and the coaches don’t really control the enrollment decline, so we’re going to play wherever they put us,” Hill said. “Obviously we have fewer enrollments, so there are fewer people to choose from. How that will affect us, that’s hard to say.”

The Aug. 27 tripleheader next features Judson vs. Johnson and then concludes with Steele vs. Brennan. You can get more information by clicking here.