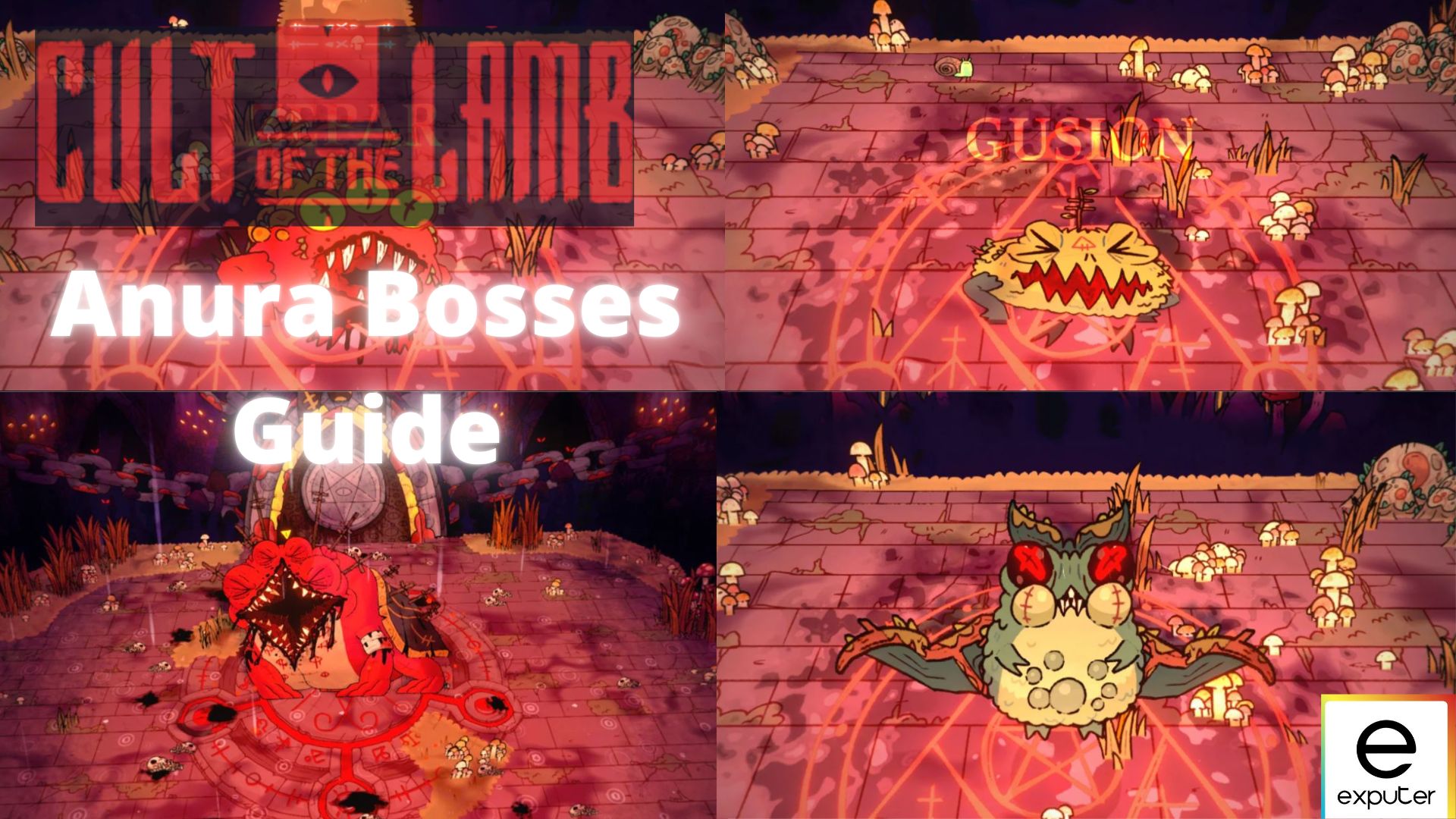 Do you want to know all the Anura Bosses? Well, look no further than our Cult of the Lamb Anura Bosses Guide; will give you all the ideas. While you’re here, why not check out our Cult of The Lamb Fan Gifts guide? It will tell you all the text in the game.

Cult of the lamb has quickly become a fan favorite. Its cute animations but its dark and sinister undertones make it a very fun game. That the new game has a cult following is certainly not an understatement! While you’re here, why not check out our Cult of Lamb Silk Cradle Chiefs guide? She will tell you everything you need to know.

Cult of the Lamb Anura’s monsters are more challenging than their counterparts, so if you want to prevail, you’ll need to master all of the game’s mechanics and look for patterns in each enemy.

Of course, it’s considerably easier than it sounds because it can be hard to remember the routines and abilities of each boss when they’re charging at you with all their fiendish power. Before we go any further, why not take a look at our BEST Cult of The Lamb Money Farm Methods guide? This way, you will never run out of money!

Some things to know before you start

As you may have already figured out, playing against these bosses is no joke, so your best bet to win is to know all the tips and tricks, which is exactly why our Anura Bosses Guide will certainly be your best bet! dude! Before proceeding, you should consult our Cult Of The Lamb: BEST Divine Inspiration Buildings guide.

First of all, timing is hands down the most important thing in preparation that you need to do for the Cult of the Lamb Anura bosses. The thing is, most of the monsters in the area move quickly and launch their attacks pretty quickly, which can be punishing if you’re avoiding using a heavier weapon.

In our Cult of the Lamb Anura Bosses Guide, we always urge you to choose your knives, blades, or gauntlets correctly.. They are super important. Why? Well, so you can easily perform melee attacks. Whenever you are confused, always look for a trusty knife; they will never let you down.

We want you to remember that you always choose Tarot cards that increase melee physical damage and swing speed or curse consumption counter as your top priorities for curses that can shoot enemies from a distance.

Also, you must upgrade your sermon faith skill tree talents and skills to at least the second or third branch. You will receive powerful weapons and spells that will allow you to easily defeat the bosses in the area.

Additionally, it will also allow you to locate weapons with special abilities like Bane and Necromancer, which could also infect enemies or transform their dead souls into projectile attacks. While you’re here, why not check out Cult Of The Lamb Cooking: All Food Types and Effects? guide? She will tell you everything you need to know about cooking in the game.

So let’s first talk about Gusion Guideldings in the game. Gusion is the first of the Anura Lamb Cult’s monsters. He imitates the jumping frog; we know it looks pretty gross. One thing to remember is that most of the enemies you’ll encounter here will have a similar move set.

His main attacks are the AOE shock wave he emits and the groups of projectiles he launches. Both are fairly simple to evade, and by using hit and run strategies you can also easily deal melee or curses damage on him.

The boss battle is challenging due to how you’ll actually create additional frog opponents by laying eggs. All of these eggs can be completely destroyed with just a few hits. But if you focus on them instead of him, you risk being susceptible to attack.

Try to destroy the eggs before they hatch, and this will make your life much easier and hassle free. It can be so annoying and frustrating to deal with adversaries that spawn quickly and easily. When only a minor enemy remains, turn your attention to Gusion and use hit-and-run strategies to reduce his health.

Very soon, it will fall and you will have already overcome the first obstacle in the area. While you’re here, why not check out our 10 BEST Lamb Cult Weapons guide, it will tell you all about the best weapons in the game.

The next monster in the area you need to watch out for is Eligos. He’s a bigger version of the flying frog opponents in the area, so he’s basically a joy to watch. He has a much more powerful move set.

It will basically come at you from one of two directions. The first method involves a swarm of flying insects zeroing in on you. Okay, so melee attacks are probably the more effective of the two. These bugs can also be killed by curses.

When the swarm is in the middle range of your attacks, try to wait and not attack until it fires a swarm before you start fighting it.

Another option is to lure the swarm to follow you until it is directly in front of Eligos. At that point, you can attack them both with a melee combo.

His other hit is a directed charge that leaves a trail of projectiles. You will have to escape past these projectiles as they start to bend inwards towards each other as you cannot smash them. Before we continue, why not take a look at our Cult Of The Lamb BEST Crown Upgrades guide?

After evading these attacks, you will have a brief chance to deal some melee or curse damage. But don’t be too ambitious. What we are about to talk about is one of the biggest mistakes you can make. Note that if you rush into quick hits, this ability will trigger more regularly and at a shorter range after you reach half health as well.

The Cult of the Lamb Anura boss we want to talk about is the notorious Zepar. It might surprise you, but Zepar actually shares a lot of similarities with Gusion’s moveset. He bounces around, creating AOE shock attacks everywhere he lands. He also throws projectiles and employs lesser enemies to occupy your attention.

Zepar, however, employs explosive projectiles to cause him significant injury if he is not vigilant. Fortunately, they have a targeting reticle that indicates where they will land. Thus, it makes it easier for you to evade them.

The relatively small opponents they spawn can also be defeated in a manner similar to that used in the boss battle against Gusion. If you’re still not sure how. Don’t worry. We will let you know!

Basically take out all but one of them before getting close to Zepar for hit and run damage. Before continuing, take a look at our Cult Of The Lamb: How To Revive Followers guide. It will be of great help during the game.

The trick to dodging the AOE shockwaves from his landing is to be patient. So it’s always best to take your time, pause until he’s done jumping, and refrain from being too anxious if you attack him with melee weapons. Never try to complete a full combination of punches before that.

One thing to remember is to always be prepared to back up in case a jump sequence begins. If you continue to proceed cautiously, you will soon be on your way to conquering the area.

The Bishop of Old Faith Heket is the final enemy of the Anura Lamb Cult, and certainly not an easy opponent to defeat. In our Cult of the Lamb, Anura Bosses Guide Heket is the most formidable enemy you will ever meet.

She’ll keep you in a stalemate with impunity with a multitude of ranged techniques, including quick tongue attacks and a host of missiles. It can also throw explosive flying objects at you if you are near or on the perimeter of the field. So as you can see, Heket is no joke!

In addition, she will also knock you down with AOE shockwaves. The final touch is a constant influx of minor enemies, with many more appearing as Heket’s health decreases.

Fortunately, his attacks are simple enough that he avidly avoids them. Escaping from the aimed reticules, they hit the ground due to the swipe of his tongue and the thrown flies. Doing so will give you time to get close and do some serious damage until he launches his next attack.

His AOE shockwaves are easy to evade by dashing to the left or right, and he may have a short buffer time to lure lesser adversaries into the farthest corners of the arena. Before we continue, why not take a look at our Cult of the Knuckles of Lamb: How to play and win guide?

His third phase, which would start when Heket’s vitality drops to a third, is the only one that requires particular actions.

To take Heket further and knock her out when she can start this phase, two sizable frog enemies must be defeated. Always try to take out any lesser enemies that try to sneak up on you while focusing on just one of them at the moment.

Avoid being reluctant to pull back temporarily and do your best to avoid spreading the damage too far. If you do all that, both of them will soon fall to you. So when Heket returns, he will attack harder than before. Keep moving and choose the right moment to finish her off with an attack.

We hope that our Cult of the Lamb Anura Bosses Guide will help you in your gaming experience.

Until next time: BEST Cult Of The Lamb Tips And Tricks