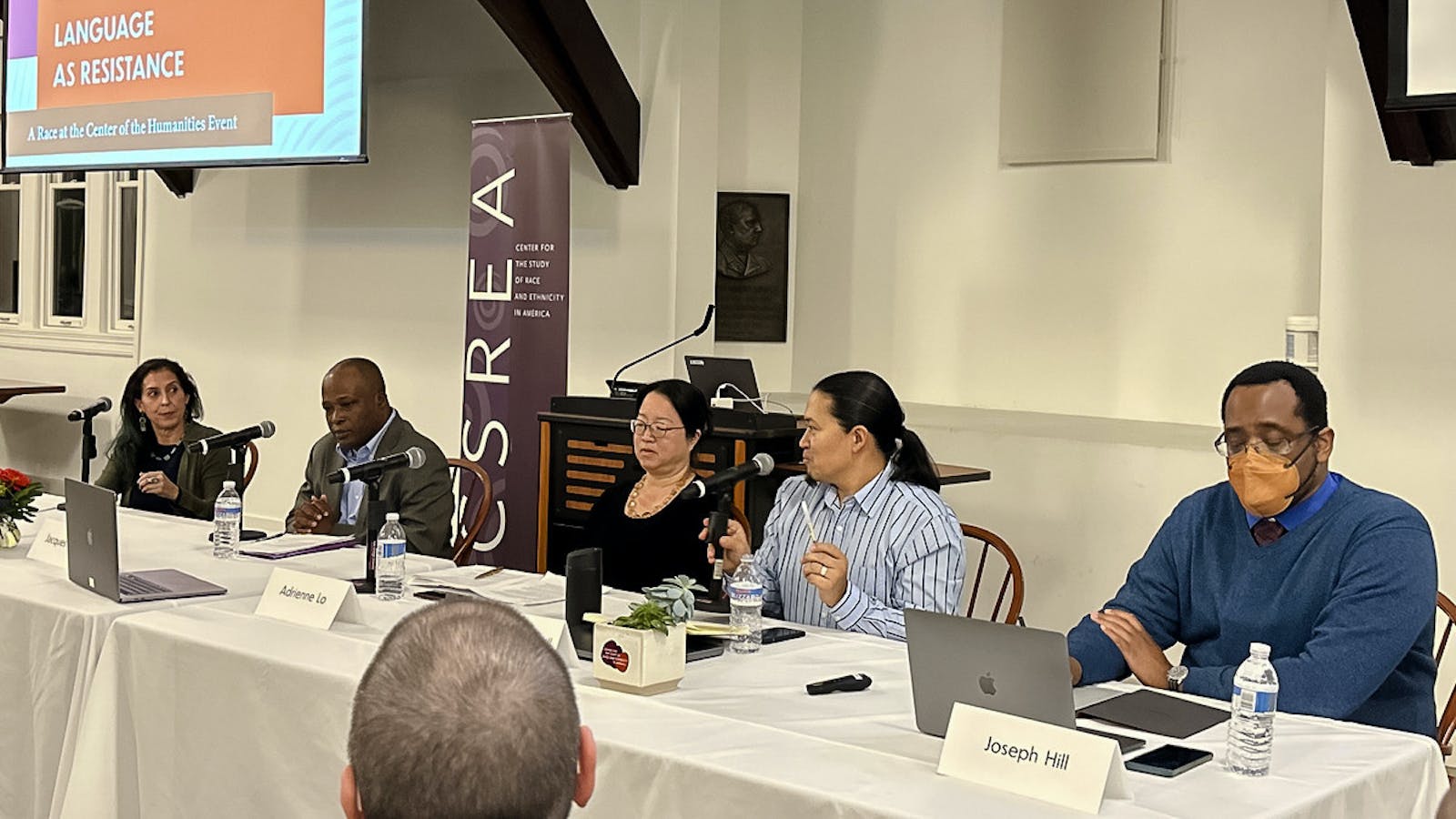 Four linguistic scholars discussed race, ethnicity, language and resistance at a panel discussion sponsored by the Center for the Study of Race and Ethnicity in America and the Cogut Institute for the Humanities on Thursday night.

Jacques Pierre, a professor of romance studies at Duke University, opened the panel by discussing the development and future of Haitian Creole as a language of resistance.

Pierre began with a history of Haitian Creole, explaining that the language arose from the enslaved people’s need for a common language and solidarity.

“The enslaved people spoke a multitude of…African languages,” Pierre said. “Because the enslaved people did not share a common language, it was impossible for them to communicate and quickly join forces and throw off the shackles of slavery.”

Solidarity among enslaved people in Haiti, Pierre said, was based on “the language they created, which is Creole.” For enslaved people, this language became “the only communication vector to resist, plan, strategize… and fight for their freedom.”

“As the saying goes, communication is power,” added Pierre.

He pointed out that the criollo “has come a long way” since its creation but has “a long way to go.” For example, while virtually all Haitians speak Creole, French “remains the language of public administration, especially in written form.”

But Pierre said he is confident in the expansion of Creole because “it is the only language that unites all Haitians and … captures the heartbeat of the country.”

Creole “can be seen as a model of resistance, creation and freedom,” built to create a “new life where skin color should not be seen as a symbol of superiority,” Pierre concluded.

X̱’unei Lance Twitchell, Professor of Alaska Native Languages ​​at the University of Alaska Southeast, continued the panel with a discussion on the preservation of indigenous languages.

The erasure of indigenous languages ​​”has been intentional,” Twitchell said. “If you live in North America and you are indigenous, the diverse survival of your language is an act of resistance.”

Today, many indigenous languages ​​have only a few speakers, many of whom are older speakers, he explained. Learning these languages ​​is important: it provides an “understanding of cultural values” and connections to past generations.

Twitchell shared his proposal to boost Native language education in Alaska, where he currently teaches. “If you graduate from high school in Alaska, you must take a semester of one of our 23 indigenous languages,” she said.

Discussions like the panel are important because they can raise “awareness of what indigenous peoples are doing and what they need,” Twitchell added.

BASL, which has been around for 150 years, originated in schools in the southern United States. “In the South, (schools for deaf students) did not sign in the same style” as schools in other regions “because of regionalism.”

The language has faced erasure, Hill explained. For example, the ASL documentation has intentionally excluded the signs used in BASL. Also, while the laws protect ASL as a language, there are no similar protections for BASL.

Get The Herald delivered to your inbox every day.

Hill explained that his research on BASL must be understood using an intersectionality lens.

“Often people are aware of the different layers and levels of systemic oppression that influence this work,” Hill said. “But also often people don’t think about disability, oppression based on disability and audism, oppression of deaf people or people who can’t hear.”

Today, online spaces are useful tools for preserving and sharing BASL. Hill said that spaces on the Internet can allow people to document, communicate and post BASL-related material.

Adrienne Lo, Associate Professor of Anthropology at the University of Waterloo, concluded the panel discussion with a discussion of Asian American identity and language-related experiences.

She discussed the ways Asian Americans must navigate expectations around the languages ​​they speak.

“They want us to learn standard English, but then they say we always fall short,” Lo said. “We’re told we should keep our legacy languages, but mastering both is framed as a threat to our ability to speak the standard.”

Conflicting language expectations for Asian Americans create societal pressures to “signalize our ability in all of these varieties (of languages), but not too much and not too badly,” Lo said. For example, speaking English “is considered necessary from an economic point of view, but also as an emblem of being whited.”

In opposition to these pressures, Lo cited measures that academics have proposed to exert their agency.

“We can reject the logics of settler language and identity,” Lo said. “We may reject labels like ‘semi-speaker’ or even ‘heritage-language speaker’ because such labels measure us in terms of distance from some truly authentic monolingual speaker.”

Lo discussed these measures as a way forward regarding language and resistance to oppression.

“Thinking with these scholars about more productive ways to mobilize concepts like agency, resistance, and liberation can lead us toward a more just and equitable future,” Lo said.

Neil Mehta is a designer and senior writer for The Herald, covering diversity. He is a sophomore from New York studying public health.