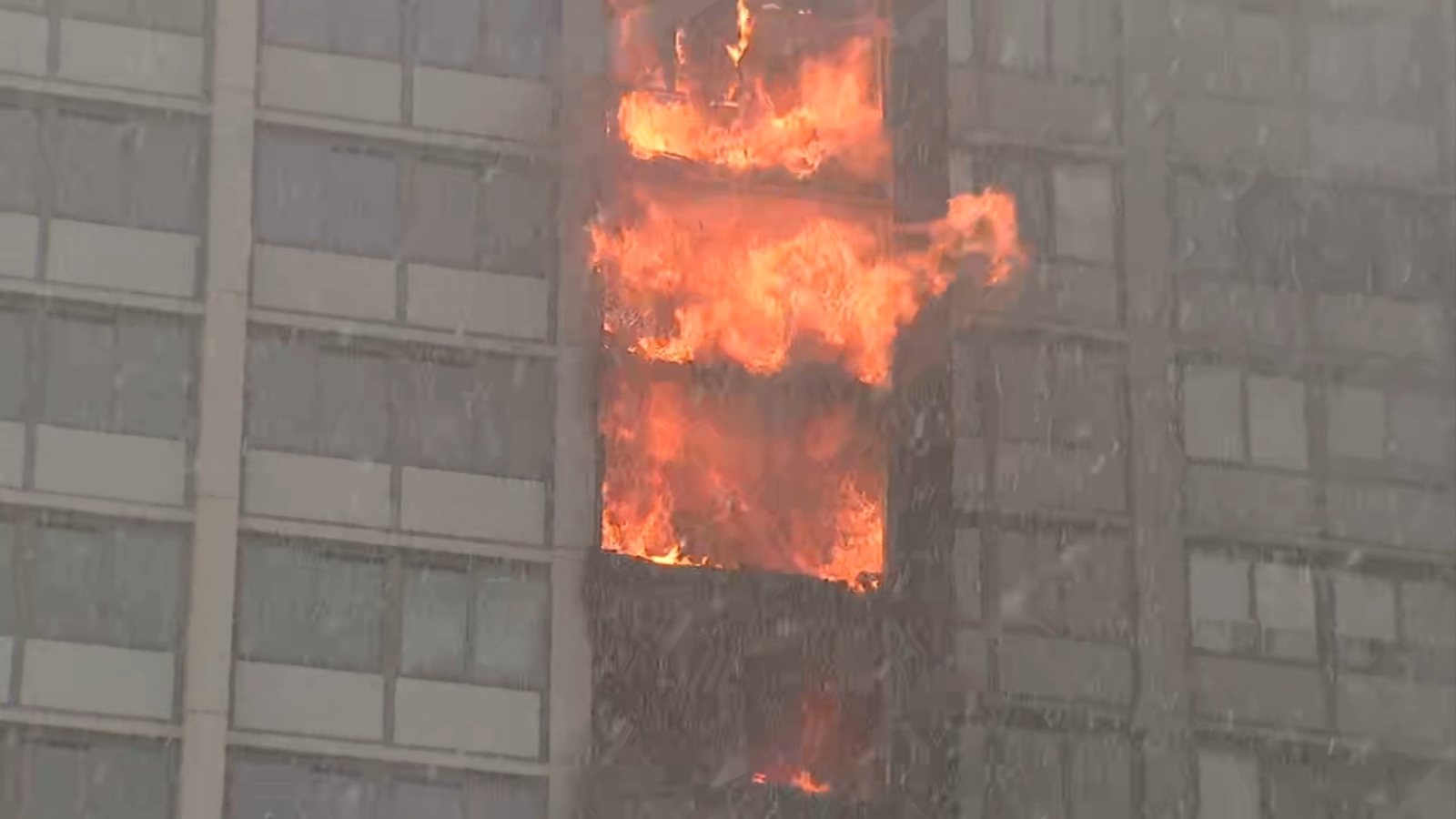 CHICAGO (WLS) — One person died as Chicago firefighters battled an additional alarm fire that climbed through several floors of a South Side skyscraper Wednesday.

Langford said one person was found dead on the building’s 15th floor.

Video from the scene showed the fire climbing up the building in a column, perhaps reaching as high as nine stories.

Since then, the fire has been put out.

This was a challenging fire for first responders, not only because it is a tall building, but because the elevators shut down early, meaning crew and staff had to get there on foot.

Then there was also the weather factor. The high winds contributed to a really fast spread, this all happened while the firefighters were trying to prioritize who needed to be evacuated and who could stay.

CFD Commissioner Annette Nance-Holt said a resident on the 15th floor noticed smoke around 10:08 a.m. and called 911. The fire intensified rapidly by the minute, jumping a total of nine stories.

“What we found here was that the fire spread from the 15th floor to the 14th because the wind was pushing,” Nance-Holt said. “The fire rose vertically and licked from floor to floor, until it reached 24, where my firefighters managed to control it.”

Hundreds of personnel were rushed to the scene trying to stay ahead. The priority was to make sure the residents were safe.

“We got a list of people who might have physical issues. We got to those units first. We prioritized those guys and then made announcements while we assessed conditions,” Deputy Commissioner Mark Furman said.

Those who were able to get out safely self-evacuated. Many more were asked to stay.

The shelter-in-place left many at a loss for what to do, saying their fight-or-flight reactions kicked in.

“I looked out the window and I saw the flames. They were right below me,” Margo King said.

She says she smelled smoke, went to her window, and saw flames coming from a story below her. That’s when she ran.

“I opened it up and stuck my head out. The flame was coming out really bad. It scared the hell out of me,” King said. “My eyes started to burn, my throat hurt. That’s why I put the mask on in the house. Crazy.”

Hours later, he went to see the extent of the damage and found his unit destroyed.

Bankole Oluyinka was at home with her daughter when the fire broke out. She says building officials told her to stay inside her unit in the high-rise.

“I don’t know why they asked us to stay inside. My daughter kept calling them what do we do,” Oluyinka said.

“My mom can’t go upstairs, but they told her the same thing,” said her roommate, David Walker.

Fearing for their lives, they decided to run down 23 flights of stairs.

“Smoke was everywhere they shook me, I didn’t have to run until I saw the fire,” Oluyinka said.

Leanne Faine said a neighbor knocked on her door to tell her and her husband about the fire.

“We ran down the stairs, we are on the 8th floor, they told us they were 15 and over, so we didn’t know what to do. We ran to the garage and got our car,” Faine said. “He just had a pacemaker. We were scared because he can’t go down the steps like we do. He has to go down the steps. He was so worn out I said come on honey come on we can’t get burned.” up here, let’s go, let’s go!”

Phyllis Powell was working nearby when her husband’s caretaker alerted her. They got out of their unit but got stuck on the seventh floor.

“We tried to leave and the firefighter said we had to stay put because we were three floors down from our place. We just had to stay. We couldn’t go down or we couldn’t go up,” Powell said.

Another resident said a worker in the building told him about the fire.

“I asked, ‘Are we going to evacuate?’ And he said no and stayed calm, so I stayed calm. I didn’t realize the seriousness of this until I saw it on the news,” said resident Astrid Exorthe.

She and others evacuated on their own, mainly due to smoke and water damage.

However, firefighters said self-evacuation could put them in danger.

“The protocol that we use with the Chicago Fire Department when dealing with a high-rise building, some units would be better to shelter in place and others to evacuate,” Langford said. “What we generally do is evacuate the floor above and below the fire, depending on the size of the building and the footprint of the building. A building like this, if it’s some distance away and the floors below and above it, the fire won’t It’s spreading laterally, it’s spreading vertically, so it’s safe on some of the drives.”

“The high-rise building is a fire-rated construction – it is built with built-in fire partitions. The doors are fire-rated doors to the apartment units. The stairwells are locked, the hallways – are set up so you can stay in your unity and be safe,” Furman explained.

Regardless, many people with loved ones in the building panicked as the flames grew.

“I cried because I knew that was his building,” said Latina Brown, whose mother lives in the building.

Brown said she was initially unable to reach her mother, who lives on the 15th floor, where the fire is believed to have started. However, he later found out that his mother was at work.

“I was just a worried daughter. I just wanted to make sure my mom was safe and that she was okay,” Brown said.

“I decided to go down to check everything,” said a resident of the building. “I noticed that people were looking at the building and then I went downstairs and saw that the fire was burning at that moment. I called my mom because my aunt is still in the building. Right now, she’s safe in someone else’s unit.

Around 12:30 p.m., CFD said the fire started. Nance-Holt said more than 300 people responded to the fire.

“A lot of people live here. A lot of people have been living here for 30 and 40 years, so this is certainly devastating to me, to them and to their families,” said State Representative Lamont Robinson. “We want to thank first responders for containing the fire.”

Looking at the damage to her unit, Oluyinka said she is grateful that she and her daughter made it out safely.

CFD said a 70-year-old woman was transported to a hospital in critical condition. Nance-Holt said eight residents were hospitalized. A firefighter who suffered a knee injury was also taken to a hospital.

A woman in her 80s, who lived on the floor where the fire broke out, did lose her life. She has yet to be identified, but those who knew and loved her said that she was a retired school teacher.

A close friend received the devastating news while praying for the best.

“I grew up here in the building and always viewed her as an aunt,” said the victim’s friend, Jauntanne Mayes. “I went back to see how she was doing, if she was okay because she had been trying to call and call and no one had been able to get through to her.”

The news of the fatality is being felt by residents and neighbors.

“I’m sad for the family that suffered the loss and I really appreciate what these guys are doing because it could have been so much worse,” said Theresa Riley, a friend of a resident.

The I-Team reports that the building has failed the last seven Department of Buildings (DOB) inspections, including one on December 1, 2022, for failing to test the fire alarm and evacuation system.

“The Department of Buildings (DOB) takes public safety and quality of life issues very seriously. Our thoughts and prayers are with the loved ones of the resident who died, the residents and firefighter who were injured, and all those affected for today’s tragic accident. fire,” DOB said in part in a statement.

DOB also said that during an inspection on November 7, 2022, violations were noted for interior door tags, exterior drywall, and failure to file the required high-rise exterior wall report. The DOB also referred the violations to the Justice Department, which filed an enforcement action in Cook County Circuit Court, authorities said. The court case is scheduled to be heard on February 2.

“DOB inspectors were on the scene of today’s tragic fire and will work closely with the Chicago Fire Department in their investigation and damage assessment,” the DOB added.

The apartment building, which was built in 1970, has 298 apartments, with about 267 occupied units, authorities said.

Sources also tell ABC7 that the individual units in this building do not have sprinklers.

The head of the Northern Illinois Fire Sprinkler Advisory Board noted that after the deadly 2003 fire at the Cook County Administration Building, the city passed an ordinance requiring all high-rise residential buildings to pass what is called a “life safety assessment.”

The ordinance does not require sprinklers as long as buildings take passive measures, such as self-closing doors to contain a fire.

“In this fire, the fire had a chance to escape, so it affected other units, so we can see that a building that passed the life safety assessment still doesn’t get the job done,” said Erik Hoffer, director of the Fire Sprinkler Advisory Board of Northern Illinois.

Hoffer urges the city of Chicago to reevaluate its fire safety ordinance.

The Office of Emergency Management is on site with warm-up buses for residents and first responders. The Red Cross is also helping.

It is unknown how many residents have been displaced by the fire.

The Salvation Army said it will provide a dinner for residents and first responders. They are cooking 500 chicken sandwiches in the Elk Grove Village EDS kitchen and will deliver them to the location.

“While the situation is still evolving, many residents right now tell us they have a place to stay. Our volunteers will assist affected residents with welfare, health services and mental health support in the event of a disaster, and shelter if the residents indicate that it is necessary”. the Red Cross said.

The cause of the fire remains under investigation.