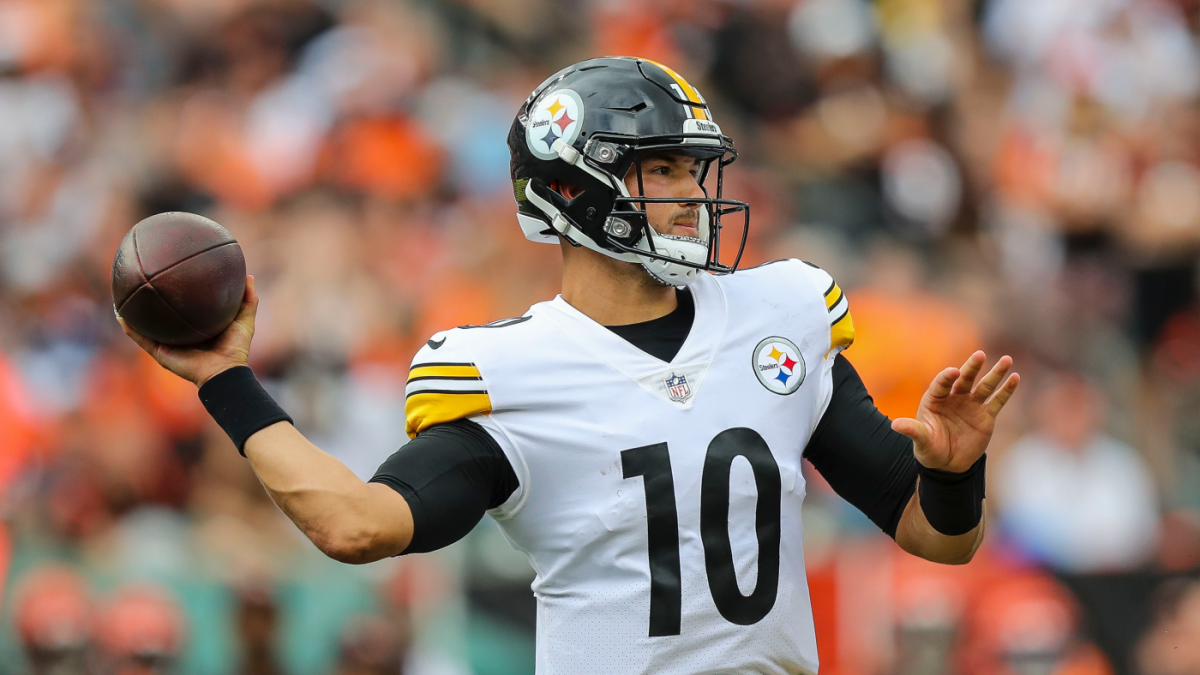 The week 3 edition of “Thursday Night Football” features an old-school AFC North rivalry as the Cleveland Browns play host to the Pittsburgh Steelers. Both teams are coming off disheartening losses a week ago, having previously picked up wins. in the final moments of the game in Week 1.

The Browns blew a double-digit lead in the final two minutes of their game against the Jets, while the Steelers barely moved the ball all day against the Patriots. Each of these teams is looking to get back into the win column and jump, at least momentarily, to the top spot in the division and hopefully establish some sort of foundation on which to race to the playoffs.

Which of them will go back to their way of winning? We’ll find out very soon. Before I break down the matchup, here’s how you can watch tonight’s contest.

When the Steelers have the ball

Pittsburgh’s offense is in serious trouble. Through two games, the Steelers have managed just 510 yards, 30th in the NFL. Per game, they actually rank 31st. They rank 26th in points per drive, 29th in Tru Media’s EPA per play, and 22nd in Football Outsiders’ offensive DVOA.

Most of the problems start along the offensive line, where things are pretty bad. They just can’t generate any kind of oomph in the running game. They have one of the highest first-down rush rates in the league (50 percent), and on those plays they’ve averaged just 2.9 yards per rush. Despite facing eight-man boxes on just 18 percent of rushes, the Steelers have averaged just 1.30 yards before contact per attempt. On plays where Najee Harris was the ball carrier (as opposed to Mitchell Trubisky, Jaylen Warren or Chase Claypool), that number is even worse: just 0.44 per attempt.

But Harris, who dealt with a Lisfranc injury during training camp and hurt his foot again in Week 1, just doesn’t look healthy. Among the 44 players with at least 15 rushing attempts this season, he ranks 32nd in rate of tackles avoided and 31st in yards after contact per attempt. Last season, he ranked seventh in tackle avoidance rate and 21st in yards after contact among 53 players with 100 or more carries.

The Browns have given up just 3.77 rushing yards so far this season, and a ridiculous 0.33 before contact. The idea of ​​the Steelers being successful in this game, given how things have gone this year, seems pretty far fetched. And that puts the game in the hands of Trubisky, who is… not very good.

Trubisky is 42-of-71 (59.2 percent) for 362 yards (5.2 per attempt), two touchdowns and one interception so far this season. That’s despite a below-average pressure rate (28 percent) and one of the lowest blitz rates in the league (20 percent). He has been thrown into a narrow window on 22.5 percent of his passes, according to NFL.com’s Next Gen Stats, and has been wide of his passes 16.7 percent of the time, according to Tru Media. He hasn’t been able to find a connection to explosive rookie George Pickens, who has been on the field on 78 percent of the team’s offensive snaps but has been attacked just five times. His numbers with the other pass receivers aren’t much better: Claypool has eight receptions for just 44 yards on 12 targets. Diontae Johnson has given up a career-low 8.6 receiving yards. Pat Freiermuth’s sack rate is down to 52.9 percent (from 75.9 a year ago).

This is not a defensible situation for an offense, and there’s no reason to expect it to get better any time soon. Pickett’s time is coming, maybe as soon as tonight if Trubisky is in trouble. With a mini-bye before the team’s Week 4 game against the Jets, there’s probably no better opportunity to make the switch.

If Trubisky (or Pickett) can find a way to try to push the ball down the field, there might actually be some opportunities available. Cleveland has allowed more completions on shots over 20 passing yards than any NFL team except the Jaguars, despite playing Baker Mayfield and Joe Flacco. However, getting the ball downfield generally requires time in the pocket, and the more time in the pocket, the more opportunities the defense has to build pressure. Cleveland ranks seventh in the NFL in pressure rate so far this season, with Myles Garrett leading the way. Trubisky has been wildly susceptible to pressure for a long time, and he’d rather get the ball off the ball quickly and in short areas than take chances with runners in the face. For those reasons, it seems much more likely that he will continue to target shots from below and thus create few, if any, explosive plays.

When the Browns have the ball

Unsurprisingly, the Browns have run the ball early and often, and with great success. The Nick Chubb/Kareem Hunt duo is one of the best in the NFL and has led the Browns to 5.28 yards per carry despite facing eight-man boxes at the second-highest rate in the NFL (33 percent rushing). , according to Tru Media). They have an NFL-best 12 rushes of 15 yards or more, good for a league-high 15.8 percent share of their total carries.

The ability to generate explosives in the run game is particularly important, because the passing game is more of a possession-based, chain-moving type of unit right now, with Jacoby Brissett in the middle. Pittsburgh has done a great job against the run so far this season, but has also played against two relatively weak offensive lines (Cincinnati, New England) compared to the one it will face against Cleveland on Thursday night. Without TJ Watt, the Steelers might be more susceptible to the running game than they have been, now that they’re tasked with facing one of the best run-blocking units in the league.

Of course, the Steelers aren’t far behind up front, even without Watt. They still bring Cameron Heyward, Tyson Alualu, Larry Ogunjobi, Chris Wormley, Alex Highsmith and even Malik Reed to the table. They can still chase down the quarterback and take him to the ground or just keep him locked in the pocket, where he’ll have to deal with heavy pressure.

The Browns will surely try to get Jacoby Brissett moving with action games and contraband concepts, with the only big backcourt they have right now being Amari Cooper. Tight end David Njoku, an elite athlete, has seen his play rate increase after landing a big contract this offseason, but he has yet to get significantly more involved in the passing game. It’s tempting to say this would be a good week to finally get him going, but he may have to deal with Minkah Fitzpatrick’s approach for much of the night. Fitzpatrick is off to a terrific start to the season with two interceptions in as many weeks, and he covers as much of the back of the field as any safety in football. Any pass from Brissett to his deep half of the field can be intercepted if he is even remotely wide.

In the end, it seems likely that this game will come down to a matter of trust in which the offense can have some degree of success moving the ball. Given the relative strength of Cleveland’s running game compared to any aspect of Pittsburgh’s offense, that’s the way we have to lean.