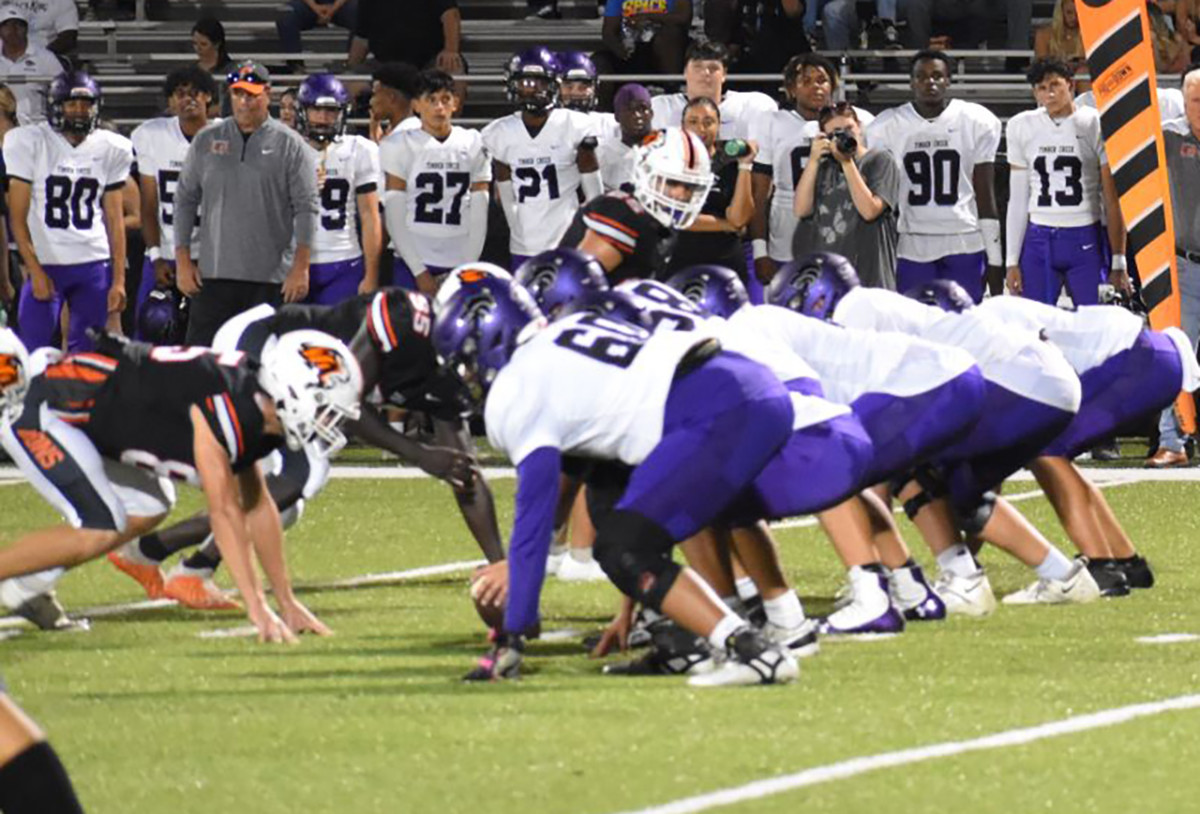 OCOEE, FLORIDA – The Winter Park High football team has met little resistance in the race for a 5-0 record this season. But the Wildcats face an entirely different team Thursday night: the Ocoee Knights.

Ocoee (4-1) is red hot entering Week 6 riding a four-fight win streak since losing to Apopka, 13-12, in a thrilling season-opener.

The Knights are considered one of the area’s dark postseason contenders this year and they’ve shown why. Ocoee has steadily improved over the last month, averaging 38.7 points in the last three games and allowing just 6 points per game in the same span.

The all-Orlando showdown is one of multiple games involving Orange County schools on Thursday, as Friday is a workday for district teachers.

“We’ve got a lot of work ahead of us, especially two days of prep work,” said Winter Park assistant coach Kit Hill. “They are 4-1 and could very easily be undefeated. They just let the Apopka game get out of hand.”

Ocoee is led by a trio of transfers: quarterback Darien Wharton, who came over from Lake Minneola and threw for 818 yards and nine touchdowns with just one interception; running back Keyondray Jones, a former Apopka player who has rushed for 519 yards and five TDs; and wide receiver Asaad Waseem, a former West Orange athlete who has caught 29 passes for 551 yards and six TDs.

Defensively, the Knights are no less impressive with senior defensive end Calvin Smith (6-foot-3, 230 pounds), a commitment from Illinois who has 44 tackles and a whopping 8.5 sacks; and sophomore Joshua Gerrier, who has three interceptions.

“They’re really good defensively,” Hill said. “They are quick and aggressive on the defensive front. (Smith) is a talented athlete and Ezekiel Brinson is nothing less than a bull in a china shop. They bring timely pressures and stunts that in previous games take them to the quarterback.

“Offensively, they like to be physical, but they also have a great ability to hurt you with the pass,” Hill said. “(Waseem) is a very viable deep threat. As usual, we’ll need to be able to run the ball and avoid turnovers, while getting a few turnovers from them to be successful. It should be a fascinating contest.”

Winter Park responds with some talent of its own. The Wildcats, led by quarterback Aidan Warner, who has thrown for 552 yards and nine TDs; running back Amaris Shaw, 271 yards, four TDs; and wide receiver Oliver Van Dyke, six catches for 173 yards, are averaging an impressive 36.7 points per game. Winter Park has three receivers with 100-plus receiving yards.

“Winter Park is a fast, athletic team,” Ocoee coach Aaron Sheppard said. “They are disciplined and well trained. We have to play clean football and limit his explosive plays.”

The undefeated Edgewater faces another tough opponent in Class 4M Timber Creek, which is one class higher than the Eagles. The Wolves are 2-1 against Orange County Schools, including a 24-22 victory against the ever-tough Dr. Phillips.

Timber Creek loves throwing it around the yard with junior quarterback Aaron Williams, who has thrown for 904 yards and seven TDs. His main target is Marcus Kral, who has 24 receptions for 386 yards and four TDs. Kral is one of three receivers with more than 155 yards.

Defensively, the Wolves are led by Michael Barlowe, who has 28 tackles.

“Timber Creek is a solid program and Coach (Jim) Buckridge has done an outstanding job there for a long time,” Edgewater coach Cameron Duke said. “We have to play clean football, win the turnover battle and be better on special teams.

“They’re talented as a wide receiver, quarterback and have a solid offensive line and good running back game, so we have to play really good defense and get 11 hats on the ball consistently.”

Meanwhile, Edgewater brings an offense led by elite running back CJ Baxter, a committed Texan who has rushed for 1,066 yards and 10 TDs. Senior quarterback Chase Carter threw for 354 yards and three TDs, and wide receiver AJ Howard had nine receptions for 156 yards and a TD.

“Offensively we need to be able to set up the line of scrimmage and make plays on the perimeter as well,” Duke said. “They have been to every game this year and they are a tough, well-trained team. We are lucky to have them home and have our work laid out for us.”

Edgewater has played one of the toughest schedules in the area to become one of the best teams in the nation. The Eagles have defeated their crosstown rival Bishop Moore, New Jersey’s Don Bosco Prep, West Orange, Jones and Apopka.

Seminole is coming off its first road loss in years, 24-17, to defending Class 8A state champion Venice. But the Seminoles don’t get a break this week when they host four-time state champion Cocoa (2-2), one of the best small schools in the country. The Tigers have become an annual entrant in the state semifinals for more than a decade.

Cocoa has once again had a tough schedule, losing to Jones and Fort Lauderdale St. Thomas Aquinas. Since then, the Tigers have been on a roll, outscoring their last two opponents, 120-3, including a 44-3 win over 2021 playoff team Melbourne.

“They are a very athletic, explosive team that is well coached,” Seminole coach Eric Lodge said. “To win, we will have to play with discipline and toughness.”

Cocoa’s high-passing team is led by quarterback Blake Boda, a transfer from the Daytona Beach Seabreeze who has passed for 1,066 yards and 10 TDs. Six receivers have 148 or more receiving yards, led by junior Dayday Farmer, who has 21 receptions for 346 yards and two TDs. Dai’veon Parham leads the Tigers defense with 30 tackles.

Seminole senior wide receiver Goldie Lawrence, who sat out a few games earlier in the season, has nine receptions for 192 yards and three touchdowns. He is a commitment from FSU.

Defensively for the Noles, second-year defensive back Ethan Prichard has 40 tackles and Jordyn Perkins has 3.5 sacks.

(also includes makeup sets from week 6 due to Hurricane Ian)

All games at 7 p.m. unless otherwise noted

Viera at Heritage, postponed until October 21

Melbourne at Harmony, postponed until October 18

Legacy Charter at The Master’s Academy

Orangewood Christian at the Foundation Academy

Heritage on the Sebastian River