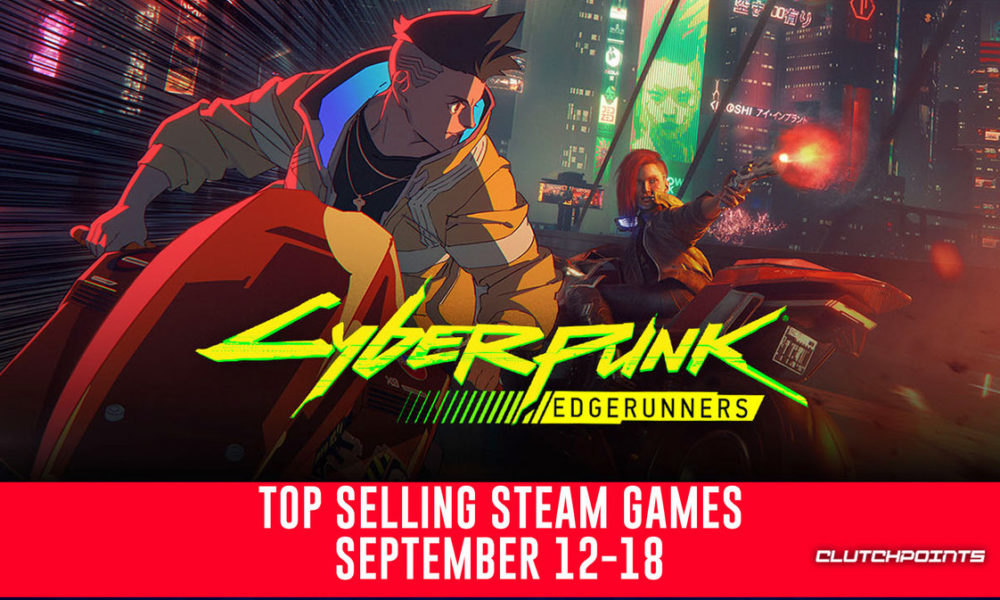 Looking for a new game to play? Your next hundred hours of enjoyment could be among these best-selling games on Steam for the week of September 12-18.

Please note that this information is taken from steamdb and is based on Steam Weekly Global Top Sellers updated every Sunday. This list is ordered by income, with 1 being the highest. Other products on the Steam Store, such as DLC, soundtracks, other additional content, and the Steam Deck, have been omitted from this list. Game pre-orders for titles that have yet to be released have also been skipped. All game information is taken from the game’s official Steam page.

For this week, PlayStation games have a significant presence on the list with their continued sale. Both Horizon Zero Dawn and God of War saw increased sales due to this, enough to push them into the top 5.

The recent success of the animated series Cyberpunk: Edgerunners combined with the game’s huge patch 1.6 update has propelled Cyberpunk 2077 to the #1 spot, a reaction for which developer CD PROJEKT RED is grateful.

“Experience all of Aloy’s legendary quest to unravel the mysteries of a world ruled by deadly Machines.

An outcast from her tribe, the young hunter struggles to uncover her past, discover her destiny…and stop a catastrophic threat to the future.

Unleash devastating tactical attacks against unique Machines and rival tribes as you explore an open world teeming with wildlife and danger.”

Horizon Zero Dawn topped the top five best-selling games after a massive sellout. The multi-award winning RPG initially launched for PlayStation 4 in 2017 and became available on other platforms including PC in 2020. Despite being half a decade old, Horizon Zero Dawn is still competitive in terms of gameplay, story, graphics and even the soundtrack, earning its spot as one of the top games on Steam this week.

For those looking for a unique experience in a meticulously crafted world, check out Horizon Zero Dawn while it’s on sale.

Developed By: The Outsiders

“Part human, part demon, and obsessed with revenge. Become The Unknown and fight in the fiercest domains of hell. Destroy hordes of demons and their leaders to prepare for an epic showdown with The Red Judge.

Metal: Hellsinger is a Rhythm FPS, where your ability to shoot to the rhythm will enhance your gaming experience. The more in sync you are with the beat, the more intense the music will become and the more destruction you will cause.”

You are offered a wide range of weapons, from skull-covered blades to assassin pistols. Each of these weapons has unique ultimate abilities. Shoot to the beat and wreak havoc. Simple.

Noted voice actor Troy Baker narrates the epic story of this game, with icons of the metal genre contributing to its original soundtrack: System of a Down’s Serj Tankian, Lamb of God’s Randy Blythe, Arch Enemy’s Alissa White-Gluz and more.

Metal: Hellsinger is a passion project from David Goldfarb, Game Director on Payday 2 and Lead Designer on Battlefield 3 and Battlefield: Bad Company 2.

“His revenge against the gods of Olympus years ago, Kratos now lives as a man in the realm of Norse gods and monsters. It is in this harsh and unforgiving world that he must fight to survive…and teach his son to do the same.

Kratos becomes a father again. As mentor and protector of Atreus, a son determined to earn his respect, he is forced to deal with and control the anger that has long defined him as he finds himself in a very dangerous world with his son.

From the marble and columns of ornate Olympus to the gritty forests, mountains and caves of pre-Viking Norse lore, this is a distinctly new realm with its own pantheon of creatures, monsters and gods.”

Much like Horizon Zero Dawn, God of War’s presence on this list is also due in part to the current sale of the game. However, there is one other caveat that God of War has to thank for being one of the best-selling games last week: the new trailer for its sequel God of War: Ragnarok. There are plenty of gamers who want to jump on the God of War bandwagon before the sequel is released, which would boost its sales to become the top 3 game on Steam.

But who wouldn’t? God of War sheds light on the new and aging Kratos facing tribulations alongside his son, Atreus. Since its initial release in 2018 for PlayStation, God of War has been one of the most prominent AAA games of recent times.

“Rise to the occasion in NBA 2K23. Show your talent in MyCAREER. Combine All-Stars with timeless legends in MyTEAM. Build your own dynasty in MyGM or lead the NBA in a new direction with MyLEAGUE. Take on NBA or WNBA teams in PLAY NOW and feel a real game.”

NBA 2K23 needs no introduction. You also do not need justification why it is on this list. It’s been two weeks since its release, and it’s gone from #4 in its launch week to being the #2 game on Steam this week.

NBA 2K23 features more control on both sides of the ball with a whole new arsenal of skill-based offensive moves, as well as 1v1 defensive mechanics to lock down the opposing player. The Jordan Challenges are back, too, and it’s up to you to recreate their iconic shots while learning more about the legend himself.

“Cyberpunk 2077 is an open-world action-adventure RPG set in the megalopolis of Night City, where you play as a cyberpunk mercenary engaged in a life-and-death struggle for survival. Enhanced and featuring all-new free bonus content, customize your character and playstyle as you take on jobs, build reputation and unlock upgrades. The relationships you forge and the decisions you make will shape the story and the world around you. Legends are made here. What will be yours?

Cyberpunk 2077 was one of the worst AAA game releases in recent gaming history, and for good reason. It was buggy, didn’t deliver as promised, and was downright unplayable at times. Since then, CD PROJEKT RED has worked hard to redeem itself and make Cyberpunk 2077 what it was meant to be: a masterpiece.

2 years later, and his previous failures seem far away. The recent patch 1.6 of the game added many improvements and new content. The release of the Cyberpunk Edgerunners animated series also contributes to the game’s recent success. All of this, combined with the fact that the game was on sale, caused players and sales to skyrocket. Reached over 80,000 concurrent players, the highest since early 2021.

Cyberpunk: Edgerunners has been received very positively by viewers and fans of the game. The attention to detail, flavorful story, and lovable characters make Night City feel more alive. It’s also been a great way to market the game, getting newcomers to the universe interested in experiencing Night City for themselves.

Cyberpunk 2077 Quest director Paweł Sasko is grateful that his game is the best-selling Steam game and writes “thank you very much for this second chance”, in a cheep. “You crazy boys are amazing. Thanks for watching [Cyberpunk: Edgerunners] and to play the game. I will do what I can to make you proud to support us”, Sasko added in another tweet.

For more gaming news, check out our press room here.