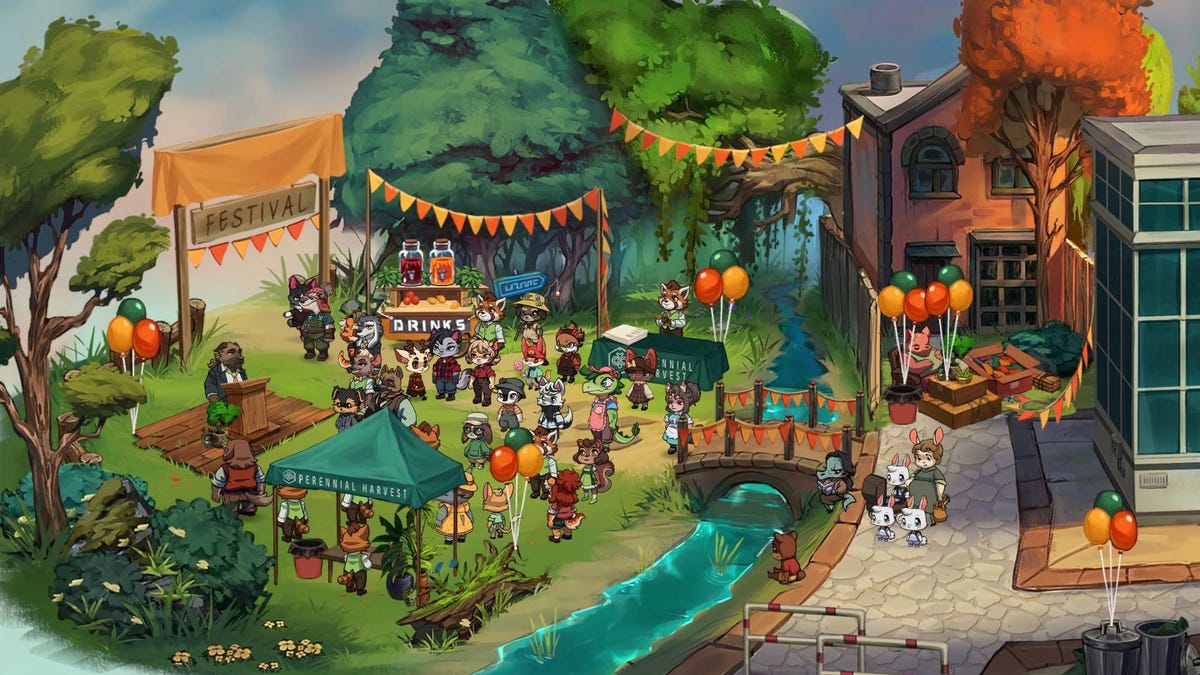 beacon pines is the tragic story of a pair of little (animal) children who come up against nefarious characters who work in an old abandoned factory. It is also the story of those same children who try to investigate these peculiar events, until they discover secrets that lead to their untimely death. And it’s also a story about these kids who take actions that accidentally hurt one of their rivals and a tragic sacrifice. But it’s not about any of those incidents either. Because this adventure and visual novel is the most extraordinary combination of overlapping versions of a reality, in which the choices of your storybook redetermine the development of its narrative.

Luka is a very cute young deer. The sad death of his father, and then the sudden disappearance of his mother, means that he finds himself being raised by an unknown but very loving grandmother. Together with his best friend (and fox, literally fox) Rolo, Luka is dealing with the pain, but with an appetite for adventure. Together, they explore the forest, work on their elaborate treehouse fort, and uncover ancient conspiratorial mysteries that question the very reality of the small forest town they live in.

All of this plays out as a third-person adventure, set in a storybook. An ever-present (and wonderfully acted) narrator tells the story in her mellifluous tones, sets the scene, and then lets you play. As you chat with the locals, run errands, read comics in the library, and discover a horrible glowing jelly-like substance in the woods, you’ll occasionally be asked to make an important decision. Do you respond to a dangerous situation with “Hide”, “Relax” or “Reflect”? Each new option is awarded with what the game calls a “charm,” which is added to your collection when someone speaks a keyword during encounters, some essential, some just for fun. Whichever you choose opens up a new (literal) branch in the storybook, which could either lead to a (literal) dead end, or move the story forward in a unique direction, or a combination of both. (It’s a very literal game.)

Each scene is simply the most beautifully rich illustration, the kind that would have kept you looking and searching for details like a child with such a book in your bed. It’s gloriously drawn, and the close-ups of the characters are another layer of rich and impressive art. I kept taking screenshots not to illustrate this article, but because I just wanted to capture the beauty.

In fact, the transitions between gameplay and when they freeze and pull back to reveal what you’re seeing as an illustration in the book never feel less special, no matter how often they happen.

The sweet presentation, coupled with silky storytelling, belies a peculiarly sinister game, in which danger and death are never far from these cute best friends and their growing gang of companions. What seems like a children’s game will soon be revealed in another way, not only with the use of curses (in fact, “Shit” is one of those charms that can be used in some situations), but also with the overwhelming foreboding that permeates all. Stunning hand-drawn art adds to this look of fairy-tale security, making the plot twists and turns even more delightfully jarring.

At each point where an amulet can be used, the game gives you a very limited choice, sometimes just two. However, picking up later spells sometimes allows you to go back to the book tree and apply them to an earlier point, to create a whole new path through the story. Or, indeed, to find another dark ending. At that point, the game declares “The End”, before the narrator protests this (differently each time, unlike many other games that have used this trick), and allows you to try another spell at another time.

The joy of these false endings and returns to earlier moments is the change of mood. Where the story may have turned dark, foreboding, even miserable, this allows things to suddenly come back to joyful life once more, where characters who had previously found themselves emotionally broken or physically damaged are now the same as before. It also develops this extraordinary way of telling a story, where multiple parallel realities fill in more and more detail for you, if not for the characters.

The most obvious concern for anyone playing the game is trying to remember all the possible versions of the story that have played out, and here beacon pines misses an obvious trick. The tree from which you can return to all previous decision points does not indicate which previously chosen options lead where. Sometimes it’s about choosing between two charms, one of which leads to “The End”, the other takes the story to another branch. But remembering which was which is not simple and becomes even more confusing when there are three options.

Adding to this potential confusion is trying to remember what knowledge the characters have on a given path and what events preceded the situation you are currently in. The game does a good job of reminding you of the big ones and will also use the omniscient narrator to nudge when a character you’re chatting with doesn’t realize something you learned in a different timeline, but it’s the smaller details that they are lost Luka and Rolo could be investigating a situation in the tree house, but is it in the timeline when they had the big fight, or is it the one where they fight? both Did they catch you at the factory? Ultimately it doesn’t matter for the scene, but it’s still a shame there isn’t a neat way to check. All of this could have been handled by the tree, if it gave little summaries of the consequences of a choice you’ve fully played.

Oh, and be careful, it won’t double-check before jumping to another path if you make a wrong selection in the tree. I recommend quitting immediately if this happens, then the game will restart at the beginning of the chapter you just started. Of course, even this isn’t simple, given that I think I’ve seen at least four different versions of Chapter 6…

However, despite those possible improvements, what’s here works amazingly well. Maybe not the impossibly complicated version. hinted by demo, but that would have been unwieldy and unpleasant. Instead, the way you experience completely different versions of the story, through concurrent realities, allows a previous version to feel like a dream you once had while experiencing the next. It really is the most extraordinary way to tell a story, no matter how silly the details may be.

QUOTE ON THE BACK OF THE BOX

Lack of information about the storybook tree.

Through history, to its many, many ends.

This is a splendid creation, superbly written, with fascinating art and a unique approach to telling a story. It’s also a fascinating exploration of grief, loss, and most of all, how we react to change. That and the secret underground organizations and their evil plans to control the cities through the production of fertilizers.

Beacon Pines is now available on the other side xbox, Change, Vapor Y Chop.