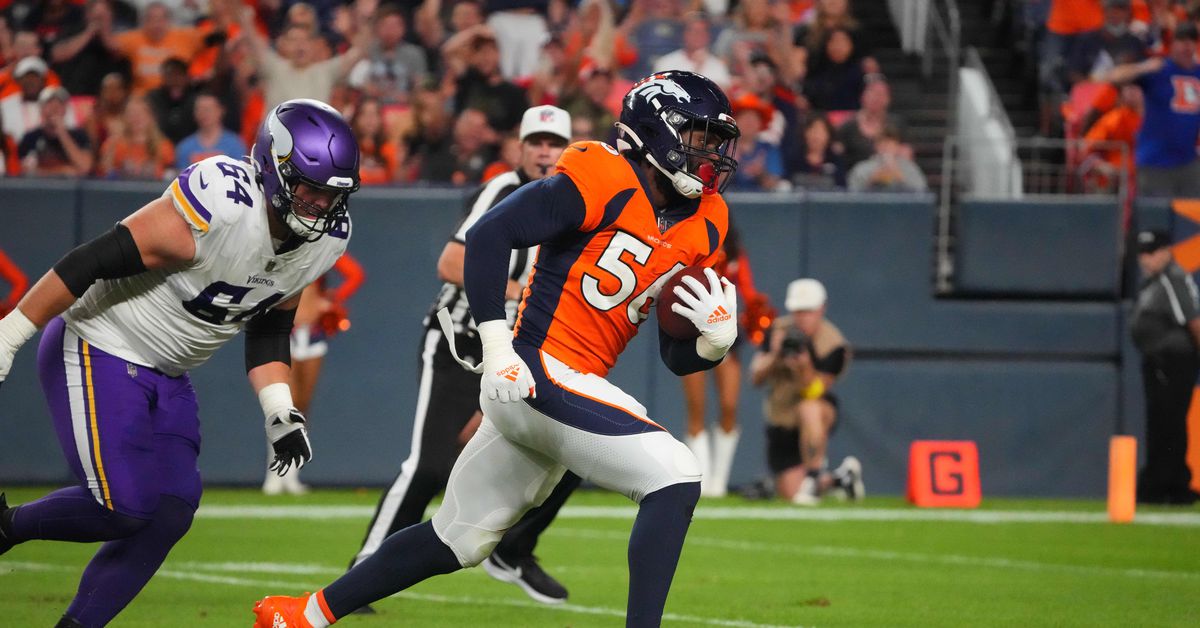 We’re just over 48 hours away from the Denver Broncos needing to cut their roster from 80 to 53, so this final preseason game against the Minnesota Vikings was the last chance many of these players would have to make their case to the body. technical. . Frankly, the team did not disappoint.

Normally, I find these final preseason games to be pretty boring as fans. not last night The game was really very good. The Broncos’ passing attack languished at times, but their running game was on point all night. Even better, the defense played with fire and intensity throughout the game. It was a fun game to watch!

Looking at the game balls from our Mile High Report staff, it seems that defense and the running game were the emphasis there as well.

There were many players who excelled defensively in this game. The one I enjoyed the most was rookie safety Delarrin Turner-Yell, who was all over the field that night. From a fourth-down goal-line stop that would be disallowed, to another fourth-down stop inside the Broncos’ five-yard line. That’s this sack to keep the Vikings from taking the lead in the fourth quarter.

Turner-Yell was a beast in this game. Denver has a lot of young safety behind veterans Kareem Jackson and Justin Simmons. I’d expect Caden Sterns to be number three, but both Turner-Yell and PJ Locke have looked impressive this preseason. -Tim Lynch

Mike Boone continues to seem like a necessary element in Hackett’s offense. He finally provided some push up front with a new offensive front. Boone dominated the Broncos’ first 2 possessions generating over 50 general purpose yards (44 rushing and 7 receiving) showcasing his vision, flare and perfect fit in the outside zone offense. While Gordon and Williams look to dominate most of the fieldwork, Boone has shown enough talent to require a handful of carries per game. Leaving him waiting in the wings would be a waste of his immense ability, as he brings a certain flavor to Denver’s backfield that the other running backs don’t. Look to Denver to boast a possible top running back rotation in the entire league with the 3-headed monster of Javonte, Melvin and Boone. -Frankie Abbott

In most situations, three receptions for 18 yards wouldn’t sniff out a game ball. But when you do it with everything Hamler has had to experience and overcome, you get a game ball. It was amazing to see Hamler back on the field for the Broncos on Saturday night, doing what he loves most. Hopefully this will lead to him making an impact for the Broncos’ offense and team this season. -Ian St Clair

Kana’i Mauga. Mauga is a bit of a long shot to make the final roster, but he certainly put in a performance against the Vikings that might make coaches think twice about keeping him. He was buzzing down the field and finished the night with 4 total tackles, 3 of them solo, 1 tackle for loss and 1 pass deflection. I’m glad he had a great night, and I hope he can find a spot on the practice squad if he doesn’t make the final roster. -Rachel Strand

Baron Browning throughout the preseason has been really impressive, he just changed his position from middle linebacker to outside linebacker and I think he put himself in a spot to be above another outside linebacker Malik Reed. He’s been explosive off the line, he’s got a great first move, he’s quick and athletic and even in the game against the Vikings, he scored the Broncos’ last touchdown with a great scoop and score, and in the game against the Cowboys. he showed up with four tackles, a sack and a pass breakup. Browning has a spot on the 53-man roster and I think he’s done enough this offseason to back up Bradley Chubb and Randy Gregory. – Tanner Watts

Agim of McTelvin. Russell Wilson’s return to Seattle isn’t the only reunion we’ll see: Shelby Harris will be there, too. Harris is the king of hard work inside and putting his hands up to deflect passes. Agim learned from the best and was on display on Saturday night. -Mike DeCicco

Who gets your game ball for the Broncos-Vikings game last night?