After two years of pandemic-related complications, the Austin Film Festival & Conference is back in full force this year – and in person – with a robust lineup of feature films, documentaries and screenwriting events.

The festival begins on October 27 and ends on November 3, with most screenings at downtown venues such as the Paramount and State theaters, with a notable satellite venue at the Galaxy Highland.

Badges and tickets can be purchased at austinfilmfestival.com. Various levels of badges take you to a wide range of events. Individual tickets are also available.

The Annual Movie and Food Fundraiser Fiesta takes place on Wednesday, October 26 at 7 pm at the Fair Market precinct in East Austin, a change from previous years at the Driskill Hotel. Badge pick-up and check-in also changed from Driskill to the Omni Austin Hotel Downtown, at 700 San Jacinto.

The following list of highlights is not exhaustive, but it is an effort to point out some of the more notable screenings to come. The recommendations also overlook many daytime events at the conference, which feature the views of writers and filmmakers. Many more events may be of interest.

“The whale” — This opening film promises to be one of the hits of this year’s festival. Brendan Fraser, who has been out of the spotlight for several years, plays a severely overweight gay English teacher trying to reconnect with his estranged daughter. His role has been receiving Oscar buzz since the film’s premiere at the Venice Film Festival. The film is based on the play by Samuel D. Hunter, and is directed by Darren Aronofsky, who will receive the festival’s Outstanding Contribution to Cinema Award. Both Hunter and Aronofsky will be in attendance. The co-stars of “The Whale” are Sadie Sink, Hong Chau, Ty Simpkins and Samantha Morton. 7:30 p.m., the Paramount.

“The spectators” — If you want to avoid opening night parking hassles downtown, “The Bystanders” at the Galaxy might be a good option. The synopsis is as follows: “A wacky sci-fi comedy set in the Bystanders dimension. Invisible immortals who watch over their subjects and intervene in their lives, often not for the better. It stars Seann Walsh, Scott Haran, Georgia Mabel Clarke, and Andy Jacey. 9:15 p.m., Galaxy Highland, 6700 Middle Fiskville Road.

A conversation with Darren Aronofsky. The director who receives the aforementioned award talks with the executive director of AFF, Barbara Morgan. Aronofsky wrote and directed the controversial “mother!” 2017, with Jennifer Lawrence and Javier Bardem. He was nominated for an Oscar for best director for 2010’s “Black Swan,” starring Natalie Portman. 3:15 p.m., the Stephen F. Austin Royal Sonesta Ballroom.

“Baby sister” — Director Nikyatu Jusu’s feature debut is described as a fable of displacement tinged with the supernatural. It stars Anna Diop as Aisha, a Senegalese woman who has come to New York to be the nanny for an unbalanced white couple (Michelle Monaghan and Morgan Spector). 6:45 p.m., State Theater.

Sam and Kate — This promises to be one of the most popular tickets of the festival. It’s the world premiere of writer/director Darren Le Gallo’s film about love, old age and dealing with the past. It stars Dustin Hoffman as Old Sam’s father Bill, played by real-life son Jake Hoffman. When Sam returns to his small hometown to care for a sick Bill, he falls in love with a local woman, Kate, played by Schuyler Fisk. Meanwhile, Bill develops an attraction to Kate’s mother, Tina, played by Sissy Spacek, Fisk’s real-life mother. Le Gallo will attend the screening, along with the four stars. 7:15 p.m., Paramount.

“Time of Armageddon” — James Gray writes and directs this semi-autobiographical story about a young Jewish man growing up in 1980s Queens. It is described as a reflection on family, friendship and class. The cast is great: Anne Hathaway, Jeremy Strong, Anthony Hopkins, and Repeta Banks. Gray will receive the festival’s Bill Wittliff Screenwriting Award. 9:45 p.m., Paramount.

“Little Jar” — If you’re a fan of unusual festivals, you might want to try Dominic Lopez’s film. Here’s how the festival programs describe the film: “When a misanthrope’s dream of isolation comes true, she learns the true value of connection when she befriends a dead mouse.” 9:50 p.m., Galaxy.

“Good night Oppy” — The first rumors indicate that this may be one of the most outstanding films of the festival. Writer-director Ryan White tells us about Opportunity, the rover that was sent to Mars for a 90-day mission but ended up having a 15-year journey, forging remarkable bonds with the robot’s humans on Earth. 14:45 Galaxy.

“Dancing Dads” — If you want to show some love for Austin-based cinema, you might want to show up at this world premiere from Austin director Brook Harris. Here’s how the festival describes the film: “Recovered from a custody battle after his wife Karen filed for divorce, Marco Mercury forms a dance team for single parents. “Los Marco Polo”, to revive his marriage and recover his family. 4:45 p.m., Rollins Long Center. Also, 2:45 pm, Thursday, November 3, Galaxy.

“Women Talking” — Writer-director Sarah Polley adapts Miriam Toews’ best-selling novel, following a group of women in a religious colony who struggle to reconcile their faith with a series of sexual assaults by the men in their group. The cast includes Rooney Mara, Claire Foy, Jessie Buckley, and Frances McDormand. It has been receiving rave reviews after its premiere at the Toronto International Film Festival. Producer Dede Gardner will receive this year’s Polly Platt Award for Production. 6:15 p.m., Paramount.

“The inspection” — This is another hot title at the festival. Writer-director Elegance Bratton tells the story of a young gay black man who is rejected by his mother and decides to join the Navy. Though there are deep-seated prejudices, the new Marine finds unexpected support and camaraderie. Jeremy Pope, Raul Castillo and McCaul Lombardi star. It was the opening night film at the Toronto International Film Festival. 8:45 p.m., State Theater. 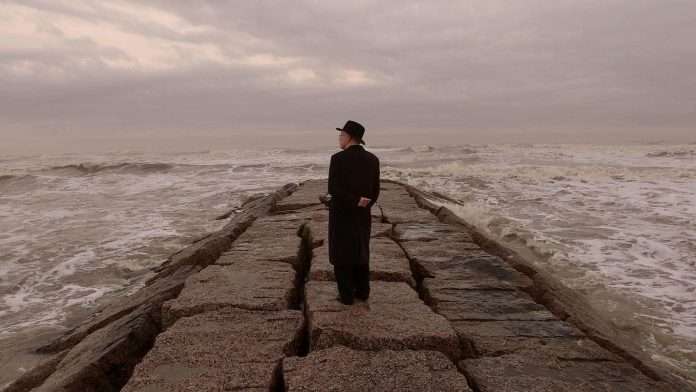 “Cicada Song” — This is probably one of the most charming, macabre and creepy documentaries you will ever see. Aaron and Robert Weiss follow the life of Dale Carter, embalmer extraordinaire. When he meets people, he says, he often wonders how many gallons of embalming fluid it will take to make them look good after death. He works for a Galveston funeral home and has a house full of unusual and somewhat strange trinkets, including a portrait of Jeffrey Dahmer, which he keeps discreetly hidden upstairs in his two-story Victorian home. He also bought the decrepit Hinchell Mansion in nearby Beaumont, and hopes to restore it to its former glory. In one of the more bizarre moments, Carter dresses up as former owner Carolyn Hinchell in a flowing skirt, puffy blouse and tailored wig, and gives tours of the various rooms. There is also a lot of behind-the-scenes footage in the embalming room. Carter’s sister, Sheri Davis, describes Dale as a child coming across a dead animal: “If he couldn’t dissect it, he would pickle it.” 3:00 p.m., State Theater.

“The Lost King” — The great Stephen Frears directs this story of a woman who is an amateur historian and decides to find the remains of King Richard III, which have been lost for more than 500 years. The cast includes the equally great Sally Hawkins, as well as Steve Coogan and Harry Lloyd. 8:15 p.m., Paramount.

“All the beauty and the bloodshed” — Writer-director Laura Poitras tells the story of activist Nan Golden, who fights to hold the Sackler family accountable for the opioid crisis. The film is more exciting than that description provides. It won the Golden Lion, the highest award, at the Venice Film Festival. 6:30 p.m., State Theater.

“The Baker” — Jonathan Sobol directs Ron Perlman, Elias Koreas, Joel David Moore, Samantha Kaine and Harvey Keitel in this story about an elderly baker who goes to a big city to uncover clues about the disappearance of his estranged son. He also carries a loaf of bread filled with high-grade heroin. 7:30 p.m., Paramount.

“Garden of the Moon” — Ryan Stevens Harris writes and directs this story of a girl who slips into a coma and finds herself in a dark and surreal underworld. 7:30 p.m., Paramount.