Welcome back to The Rundown, our daily breakdown of comedic news we missed from the day before. Do you have a link to share? Email our team at [email protected]

In case you missed it, TKO Studios is publishing the fictional story graphic novel “The Witches of WWII,” and we had an exclusive sneak peek at Marvel’s “Iron Fist” #5. 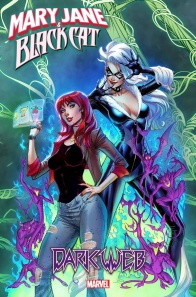 – Marvel has announced a ‘Dark Web’ tie-in starring two of Spider-Man’s greatest loves. Jed MacKay and Vincenzo Carratù are launching the five-issue “Mary Jane & Black Cat” limited series, which will tie into the upcoming Spider-Man/X-Men/Venom crossover event. The series finds the pair crossing paths when they are thrown into the Limbo dimension. MacKay has been crafting the Felicia Hardy story through several ongoing and limited series over the past few years, including January’s “Mary Jane & Black Cat: Beyond” one-shot and the current “Iron Cat” miniseries. The first issue of the series will feature a main cover by J. Scott Campbell. “Mary Jane & Black Cat” are teaming up to hit shelves on December 21.

– Writer Steve Foxe has been creating a 10-page “Spider-Man” comic book series for Disney’s European division and, for his Twitter, those stories are beginning to see publication in the UK through Panini’s “Spider-Man Magazine.” Claudio Sciarrone provides the art for the first two stories, with colors by Valentina Taddeo and letters by Arancia. “At the moment these are only available in the UK,” said Foxe. “But hopefully they will move to the United States at some point. It’s been such a thrill helping create classic Spidey stories for all ages with such talented collaborators! The stories were published in “Spider-Man Magazine” #413 and #414.

– The writing team of Matt Silverstein and Dave Jeser (drawn together) have signed a joint development agreement with IDW Publishing. Through Deadline, the deal will see them develop and produce the sci-fi comedy. Family time as a television series and an original comic book series. Writer James Asmus and artist Edison Neo are set to work on the comic. No definitive timeline or synopsis was announced for either the show or the comic, but the “Family Time” comic is scheduled to be released sometime next summer.

– Meanwhile, IDW is moving former Archie Comics executive and current IDW board member Allan Grafman into the CEO position. Through ICv2, the current CEO, Ezra Rosensaft, will step down effective August 29. Rosensaft had served as CEO since 2019, the same year Grafman joined the IDW board. “Allan will build on the foundation established by Ezra Rosensaft, whose leadership as CEO and CFO has contributed greatly, strengthening our bottom line and sharpening our focus on acquiring and developing original IP content for television and publishing,” said Howard, president. of IDW Media Holdings. jonas

– Through Horror DNA, Dark Horse releases the new original graphic novel “Skinner” from co-writers Micky Neilson and Samwise Didier, artist Piotr Kowalski, colorist Dennis Calero and letterer Frank Cvetkovic. The horror story follows six internet celebrities and one superstar survivor, who are chased by the titular hillbilly of local legend when his plane crashes in the Canadian wilderness. Didier provides the book cover. “Skinner” will hit comic shops on May 3, 2023 and bookstores on May 16, 2023.

– Amid the many headlines surrounding Warner Bros. Discovery and HBO Max, the hollywood reporter reports that DC Films has found its version of Kevin Feige. Producer Dan Lin has entered talks to take control of the studio, with current chairman Walter Hamada transitioning out of the role. It was recently reported that Hamada was on the verge of resigning from him after the new CEO of Warner Bros. Discovery, David Zaslav, canceled the almost finished project. Bat girl movie earlier this summer. A prolific executive producer, Lin has directed several hits through his Rideback production company, including the lego movie, It’sand live action Aladdin. Zaslav has previously said that he hopes to “reshape” DC Films with a 10-year plan that would compete with rival Marvel Studios.

– Netflix comic adaptation the umbrella academy has been renewed for a fourth and final season. Via Variety, the new season of the series, which is based on the comic by Gerard Way and Gabriel Bá, was announced alongside a new overall deal with showrunner Steve Blackman and his production company Irish Cowboy. Cast members Elliot Page, Tom Hopper, David Castaneda, Emmy Raver-Lampman, Robert Sheehan, Aidan Gallagher, Justin H. Min, Ritu Arya, and Colm Feore are expected to return for season 4. The season will reportedly be shorter than the previous one. series seasons. Blackman’s overall deal also includes development of a video game adaptation Horizon Zero Dawn with co-creator Michelle Lovretta, and the original sci-fi series. Orbital with writers and co-creators David and Keith Lynch.

– Boys is adding Living Dead star Jeffrey Dean Morgan to the cast of its fourth season. Via the hollywood reporter, the nature of Morgan’s role is currently under wraps. Morgan is the second student of Boys executive producer Eric Kripke Supernatural to join the series, following Jensen Ackles’ season 3 role as Soldier Boy. Boysa dark superhero satire based on the comic book by Garth Ennis and Darick Robertson, recently finished airing its third season.

– Speaking of Jeffrey Dean Morgan, the Living Dead The spin-off series with Morgan’s Negan and Lauren Cohan’s Maggie has been given a new official title. Via entertainment weekly, The Walking Dead: Dead City was confirmed as the new title by AMC. The series, formerly known as Island of the deadIt will reportedly follow Maggie and Negan to a post-apocalyptic Manhattan, bringing them into conflict with “the dead and denizens who have made New York City their own world filled with anarchy, danger, beauty, and terror.” dead city has begun filming ahead of the return of the eleventh and final season of The Walking Deadwhose final block begins on October 2.

– Finally, digital comics distribution company GlobalComix has partnered with publisher Top Cow to release PDFs of Top Cow titles. Through Newsarama, the partnership will include high-quality PDF releases of books including “Witchblade,” “Postal,” and “The Darkness,” all of which will be DRM-free downloads that can be downloaded, shared, and viewed on any device. Each PDF will also be uniquely generated at the time of purchase, meaning removing the item from the store would not affect the buyer’s own library.