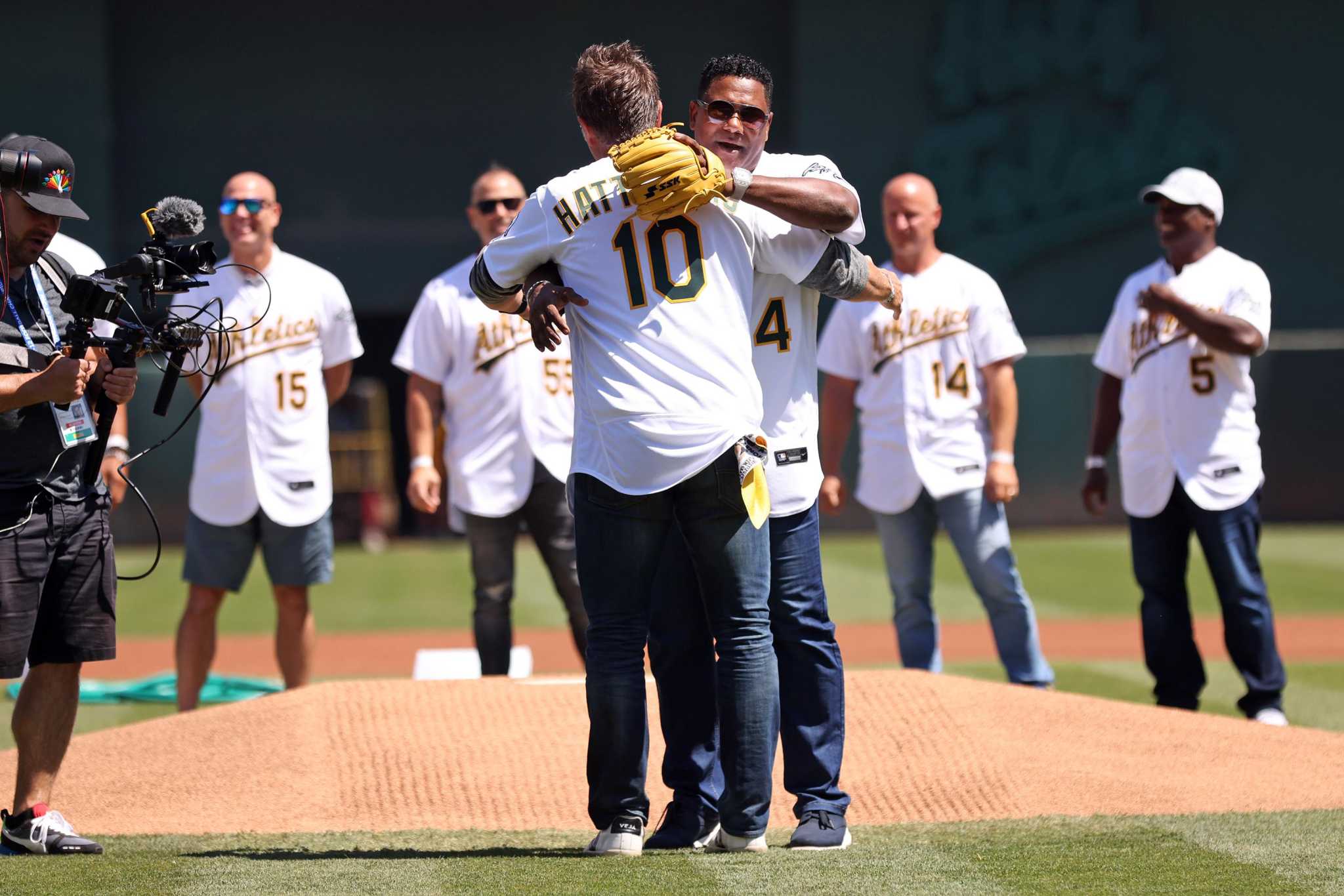 In hindsight, they say, it’s 20-20. The retrospective played a big part in the pre-game festivities at the Coliseum on Sunday.

The Oakland Athletics celebrated the 20th anniversary of their team’s 20-game winning streak in 2002. Two decades have in no way overshadowed what that streak meant to that team and what those players meant, and still mean, to each other.

“Every time we see these guys, it’s like we never left,” outfielder Terrence Long said. “We’ve all gotten older, but as for that group, we were very close. We picked up where we left off when everyone saw each other.”

Manager Art Howe said of his players: “It’s like they played together yesterday. It’s so nice to see. You always feel like these guys really liked playing together and enjoyed each other.

“And when you see this happen and the way they respond to each other, you know that was the case.”

The 2002 A’s were 19-25 and 10 games out of the first in the AL West in late May before getting underway. In June, they sandwiched two eight-fight win streaks around a single loss. They finished 103-59 and won the division by four games over the Angels.

The 20-game winning streak began with a 5-4 decision over the Blue Jays at the Coliseum on August 13. The three most memorable games of the streak were the last three: On September 1 at the Coliseum, shortstop Miguel Tejada hit a game-winning, three-run home run in the ninth to beat Minnesota 7-5.

The following day, Tejada’s RBI single to center field in the ninth beat Kansas City 7–6 and the A’s tied the American League record for longest winning streak at 19.

“Miggy helped us out a lot of times,” first baseman/DH Scott Hatteberg said.

Tejada won the American League MVP in 2002, hitting .308 with 34 home runs and 131 RBI. He called Sunday “really special, because this is the team that I come from. I was born into this organization. They gave me the opportunity to come from the Dominican. I played my first match in this stadium.”

His debut came almost exactly 25 years ago: on August 27, 1997, in an 8-7 victory for the A’s over the Yankees, the Oakland team received Sunday.

The 20th win of the streak came on a Wednesday night against the Royals. The A’s built an 11-0 lead in three innings and had one of the Big Three, Tim Hudson, on the mound.

Hudson (15-9, 2.98 ERA in 2002) recalled that he wasn’t exactly convinced the big lead was big enough. He said the Royals “could really hit. They were kind of my nemesis. My career numbers against Kansas City were not very good. … It was one of those things, I was like, ‘Man, I know we’ve got 11 guys, but a few more would really make me feel better.’”

KC got to Hudson by five in the fourth. The Royals put another 5 on the board in the eighth against Oakland’s bullpen and scored the tying run in the ninth off closer Billy Koch.

“The change in momentum, man, you could only feel the air sucked out of this place,” Hatteberg said.

That night there were 55,528 fans in the Colosseum. Hatteberg sent them home in ecstasy and created the streak’s signature moment when he, as a pinch hitter, threw Jason Grimsley’s pitch over the wall in right-center field.

“There’s a lot of talk about it, which is great,” Hatteberg said of that home run. “It’s such a proud moment.”

Hudson enjoyed the proud moment of winning a World Series with the Giants in 2014.

In 2017, Cleveland broke the A’s American League record for the longest winning streak when it fielded 22 players. That doesn’t diminish what the A’s accomplished 20 years ago.

Members of the 2002 team at the Coliseum on Sunday were together on the infield grass. With the likes of Ramon Hernandez, David Justice and Mark Mulder behind him, Hatteberg addressed the fans.

“This place may not be new,” Hatteberg said, “but if you put enough green and gold in here, it shines brightly. So, from the bottom of our hearts, we want to say thank you. Thanks for the memories.”

Moments later, the A’s unfurled a “20” banner on the upper deck facade in right field, providing yet another 20-20 memento.