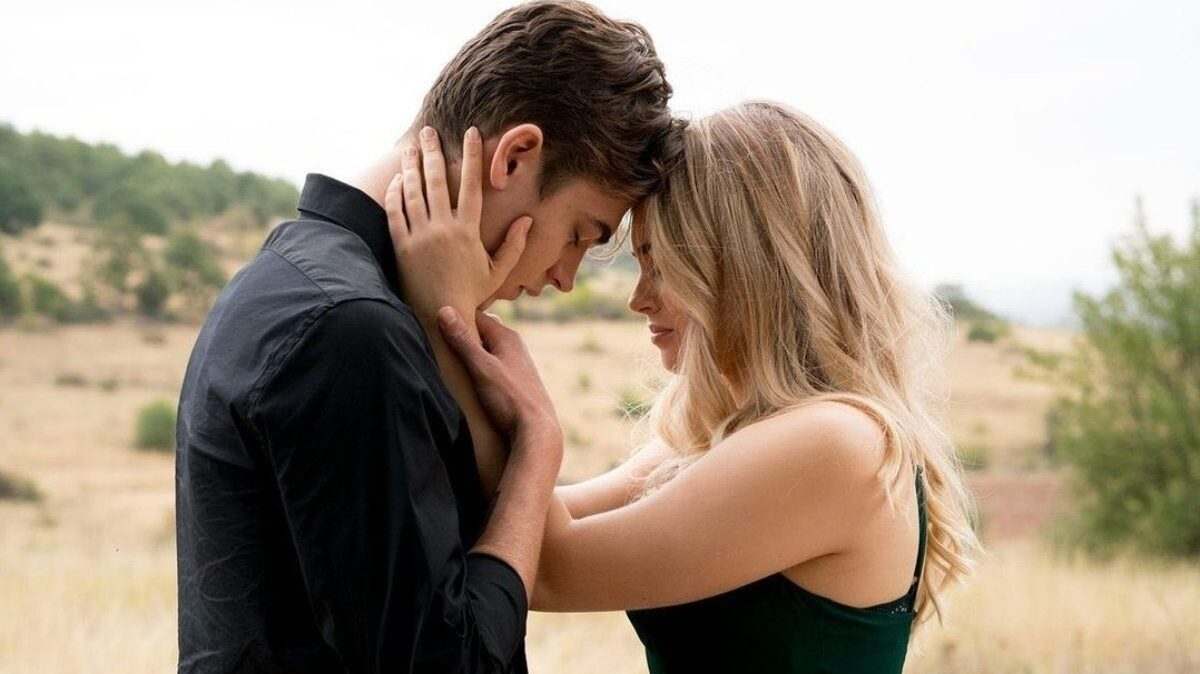 It’s not easy fighting your demons. It is not easy to face the harsh realities of life. It is not easy to keep walking when you feel that the world has been left with all the weight on your shoulders. Everyone regrets it, but helplessness arises when you realize that you can’t do anything about it. Being in a constant state of conflict with your own vulnerabilities and insecurities is hard, but accepting the fact that battle scars will never heal is harder. Directed by Castille Landon, “After Ever Happy” is the fourth film in the “After” franchise and is based on the novels written by Anna Todd. In the previous installment, titled “after we fell”, we saw that Hardin came to know that Christian Vance was his biological father. Inadvertently he made his way to a room where he found his mother and Christian sharing an intimate moment. He thought it was simply a moment when they both gave in to his carnal desires, but he realized there was more. For 21 years, Hardin thought Ken Scott was his father. The revelation left him numb. He couldn’t process anything. Life had been unfair to Hardin, but now it seemed the nightmares would never end. He went and confronted her mother and told her that somewhere she was bearing the consequences of the choices she had made in her life. So, let’s see what “After Ever Happy” has in store for us and how this unforeseen revelation impacts the lives of Hardin and Tessa.

Plot Summary: What is the movie about?

Hardin was devastated to learn the truth. He didn’t know what to do next. He didn’t know if he should validate her mother’s actions or be angry with her. He realized that there was no way to resolve this conflict. He knew that he would have to accept things as they were. He could be angry at the world for being so unfair, but that wouldn’t change the past. Christian Vance was his father and sooner or later he had to accept that fact. Tessa didn’t know how to fix Hardin either. She didn’t know what to say to him that would make him feel at peace. She told him that she loved him and that she would always be by her side no matter what, but that wasn’t enough to calm him down. Tessa tells Kimberly (Christian Vance’s wife) that she feels lost. She didn’t know where her relationship was taking her. She loved Hardin, but she felt over and over again that she would never work out with him. It was true that whenever they fell out, Hardin would always come back and try to fix their relationship. But it was only a matter of time before the pattern repeated itself once again. Tessa was tired of fighting the odds. She wanted some peace in her life. She decided that she would go and try to talk to Hardin. She decided to give their relationship one last chance. Hardin had gone to Mark’s house. He wanted to drown himself in alcohol and forget everything that had happened. Tessa found out where he was and went to bring him back. She found him with a girl at the party. She knew Hardin didn’t want to face the situation. She urged him to face his demons and not hide like a coward. They had an argument and Tessa left the premises. She had decided that things would not work out between them and that there was no point in trying unnecessarily to avoid the inevitable.

Tessa returns to Washington state alone. Everything reminded her of the beautiful time she spent there with Hardin. Landon, Hardin’s stepbrother, was always there to support her. Tessa was still dealing with her separation when she found out that her father’s drug addiction led to her fateful end. She found him lying on the ground with a syringe in his hand. Landon told Hardin about Tessa’s father’s death. Landon knew that only Hardin could help Tessa. Hardin returned to the United States. He made all the arrangements for the funeral and tried to be emotionally available to the girl whom he loved with all his heart. He felt that maybe this time, things would get back on track. But Tessa had decided that she wanted some time off. She wanted to be alone and understand what she wanted from life. She tells Hardin that she already planned to move to New York and that she wanted to stay there with Landon for a while. Landon, being the good friend that he was, supported her decision. Hardin was angry at Landon for not telling him about Tessa’s decision. Hardin yells in frustration. Life itself had become a burden, and a troubled Hardin just wanted to escape the worst nightmare of his life.

‘After Ever Happy’ ending explained: Do Tessa and Hardin end up together? What happened in New York?

Tessa began her new life. She began working two jobs to divert her attention from events that had occurred in the past. Hardin also began to walk the path of redemption. He wanted to improve her life. He wanted to become the kind of man Tessa would happily spend her life with. He went to a rehabilitation center to get rid of her alcohol problem. Something extraordinary happened during those rehabilitation sessions. She read excerpts from her personal diary. There were a lot of personal details in there, and she read everything. People have fun with the story. They urged him to publish it. Hardin had never written it with the intention of publishing it, but the kind of response he got from others gave him a sense of purpose. He knew that he might be able to get her life back on track through it. However, he did not tell Tessa. She received an offer from a publisher in New York. She called Landon and told him that she was coming to New York. She did not reveal the purpose of her visit. He wasn’t trying to hide anything, he just wanted to tell Tessa at the right time.

Tessa was skeptical about meeting Hardin, but once she did, hope was rekindled. She saw that she had given up alcohol forever and that he was a changed man. She could feel the transformation. She began to entertain the idea of ​​living her life with him. Things were looking positive when Tessa came across a manuscript. It was the draft of the novel Hardin had been writing. Tessa read everything and confronted Hardin. She was angry with him because it was also his life story, which he planned to tell the whole world. Hardin had always been very secretive about everything he wrote in his diary. He didn’t even tell Tessa about it, and now he was posting it. Hardin always wanted it to be a story of forgiveness and unconditional love, but Tessa didn’t see it that way. She felt violated. She decided that it was time to leave Hardin for good. They both go their separate ways. The novel went into print and garnered rave reviews from critics. They called the story heartbreaking and applauded the writer, Hardin Scott. At the end of “After Ever Happy”, we see that Tessa ditched her date and went to see Hardin for a book reading session. She didn’t meet him, she just stood there looking at him. She left the place without being noticed. Hardin never saw her, but he felt her presence. She felt the warmth of it. They both still wanted each other, but there was nothing they could do about it.

“After Ever Happy” ends, but Tessa and Hardin’s story isn’t over yet. Maybe one day, when the dust settles, they will be able to figure out what they really wanted out of life and if it was possible for them to live their lives without each other.

“After Ever Happy” is a 2022 Drama Romance film directed by Castille Landon.