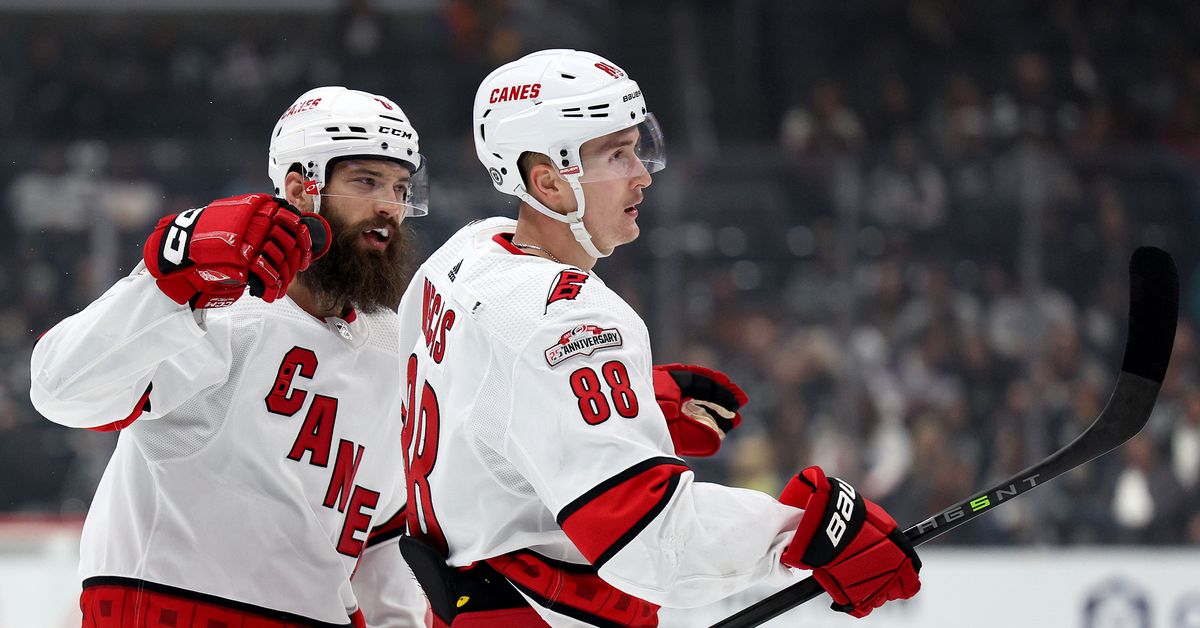 The stars aligned again for the Carolina Hurricanes on Saturday night as the team put together a strong 40-minute start for its fourth straight win and third straight on the six-game road trip.

Their win formula didn’t change much from recent games. It was another stellar night for Carolina’s offensive leaders against a 31-save effort from their young starting goalie.

The Hurricanes did a great job controlling the pace of the game for the first 40 minutes, and their ability to do so was the deciding factor in the game.

The scoring began four minutes into the first period thanks to a great job in the defensive zone of the third line of Carolina.

Jordan Staal and Jesper Fast combined to win a backboard battle at their own end, driving the puck past Jordan Martinook, and the red-hot veteran winger set up Brady Skjei for a superb move and spike over Jonathan Quick.

Martinook secured his fourth point in two games with the main assist, following his hat-trick against the St. Louis Blues on Thursday.

The Hurricanes made just six shots against in the opening period, and their quick start was backed up by a great finish after the Kings began having penalty trouble.

40 seconds into a Carolina power play late in the first period, Los Angeles’ Adrian Kempe tripped Martin Necas. That set up a delayed penalty sequence and a brief 6-on-4 that the Hurricanes’ top point producer took full advantage of.

Necas unleashed a perfect shot from the top of the right circle that beat Quick through a great screen from Stefan Noesen. Necas’ 12th of the Year extended his point streak to four games.

The Hurricanes opened the second half with another great opportunity. Calvin de Haan slipped a perfect pass to Sebastian Aho’s stick along the goal line, but it was a rare mistake by Aho that kept the game at 2-0 for a brief moment. Aho was then given another call at the net in which Quick made a phenomenal jump.

Those two near misses from Aho probably just added some satisfaction to his final tally late in the middle frame.

Aho stole the puck from a Kings forward in the Carolina zone, passed it to Seth Jarvis, and the front line drove the puck through the neutral zone. Necas sent a centered pass to a charging Aho, who cornered him and flipped the puck into the net to make it 3-0.

The lead assist marked Necas’ eighth multi-point game of the season and put the Hurricanes in prime position with a three-goal lead entering the third period.

Crack it in the Final 20

The third half was the best for the local team. They put pressure on the Carolina defense and Pyotr Kochetkov, who made some big saves all night but was ultimately outplayed by the Kings’ second-man lead in the period.

Arthur Kalyiez opened the scoring for LA in a single cross time. Kochetkov caught much of the shot but managed to slip under the arm and into the net.

The Kings were alive, going on the offensive in post-goal turns. Kochetkov had to deal with a wave of chances in a two-goal game, but nothing came of it for the Kings.

The Hurricanes got a much-needed rebound to go their way on a fast break around the 12-minute mark. Brent Burns waited for the team to execute a line change, then quickly found Andrei Svechnikov’s tape in the neutral zone. Svehcnikov danced around and across the Los Angeles back line before attempting a pass to Jarvis, but the pass deflected off Drew Doughty’s skid and right over Quick’s bag for an incredibly well-timed goal.

Svechnikov’s 15th goal in 25 games this season was the dagger for a Kings club that was showing signs of life in the third half.

Samuel Fagemo scored his first of the season with just over two minutes left in the game, but that wasn’t enough to spark a comeback. The Hurricanes survived the third period push and finished the night with a 4-2 victory.

Led again by the big 3

Carolina’s offense has been led by Necas, Aho and Svechnikov this season. And again, that was the case in So Cal.

The front line of Necas, Aho and Jarvis was the best trio on the team last night. Jarvis’ assist on Aho’s goal in the second period extended his point streak to five games. He has points in six of his last seven games, and that’s a wonderful sign from a second-year player who has been struggling for several weeks.

In the month of November, Necas, Aho and Svechnikov scored 50% of the team’s goals. They put up three of four in Los Angeles in another great performance.

With each passing game, Necas shows that his good start was not a fluke. He’s a different player this season and has terrorized Carolina’s opponents every night. Jarvis’ awakening has helped make the front line a constant threat.

Kochetkov had some shaky moments in the win, but his numbers remain undeniable. He has a 3-0-1 record with a .932 save percentage in his last five games. The 23-year-old has a .919 save percentage on the year in nine appearances.

Teuvo Teravainen returns safely from injury. He seemed comfortable with the ice time of 15:47 in his first game since Nov. 10. It was also definitely one of Paul Stastny’s best games with the Hurricanes. He had a couple of quality scoring chances in Quick, and while he couldn’t get his first goal for the team, hopefully this is a critical building block for him going forward.

Next up for the Hurricanes is a meeting with the Anaheim Ducks on Tuesday.