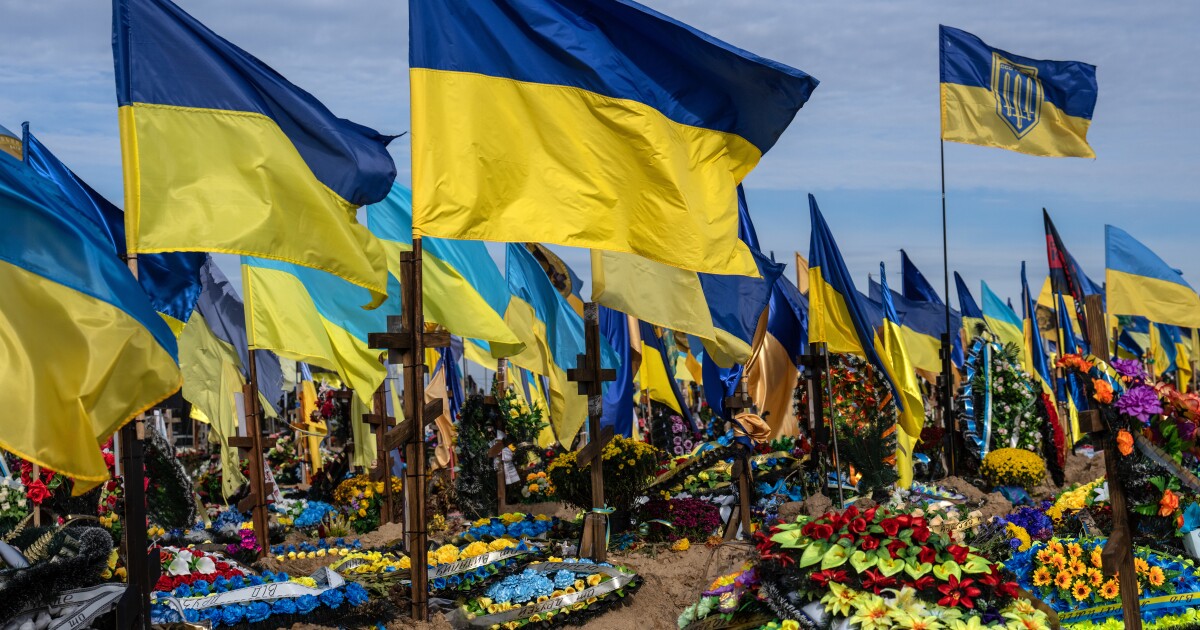 Journalist Luke Harding saw firsthand the nature of Russian President Vladimir Putin’s regime, while serving as Moscow Bureau Chief for The Guardian from 2007 to 2011. The Kremlin didn’t like what he was writing, Harding says, and as a result, they raided his apartment, spied on him, harassed him, and eventually expelled him from Russia.

“The country was teetering toward darkness,” says Harding. “It was already authoritarian when I got there, but it was going towards totalitarianism.”

Harding says it was clear that Putin had never really accepted the independence of the post-Soviet republics. In 2014, Russia occupied parts of eastern Ukraine and annexed Crimea. So when Russia sent tanks to the Ukrainian border in the fall of 2021, it knew it wasn’t a hoax. Instead, Harding says, “I thought we were headed for a great, terrible invasion.”

Harding began reporting from Ukraine in December 2021 and was in the country’s capital, Kyiv, on February 23, the night before the Russian invasion began. That night, he recalls, the city was a portrait of normality: a busker played Edith Piaf songs outside her hotel, while couples dined in cafes and women sold tulips in buckets. Just hours later, at 4 or 4:30 a.m. on February 24, Harding’s phone rang and he learned that the war had begun.

“I put on my boots and coat and, like everyone else, I went down to the hotel’s underground garage,” he recalls. “My mind was buzzing. It was going very, very fast.”

As a foreign correspondent, Harding initially focused on the geopolitical consequences of the invasion. But then a mother arrived at the shelter with two small children clutching coloring books, and a different reality set in: “What became clear to me at that moment was that as the Russian bombs were falling and the first columns of tanks were advancing on the capital Ukrainian, that civilians were going to be killed. Maybe not these children, but other children,” he says. “And, in fact, more than 400 children have been killed.”

Harding has continued to report from the Ukraine throughout the year. In the spring, he reported from Bucha and from Mariupol. Most recently, he was in Kherson, covering the liberation of the city and the death, destruction and land mines left behind by the Russians.

“When you do these things, you’re rolling the dice,” he says of reporting from a war zone. “You don’t want to stay, but at the same time, unless you go to the front, how can you report on the lives of the people who live there?”

Harding’s new book, Invasionhe chronicles the war and his experiences covering it, and discusses the politics, strategies, and delusions behind it.

“This is a terrible story,” he says of the war. “I think my plea, if I have a plea, is that we continue to pay attention to Ukraine and its fate. And let’s continue to read the news to think about it with kindness and empathy.”

On the destruction and mass graves in Russian-controlled Mariupol

Mariupol, which I visited at the end of January this year, is a horror show. I mean, it’s hard to be definitive about what happened, because obviously, this is now under Russian control. But we know from people who are there, from eyewitnesses, from people who later escaped, that thousands of civilians died because of it, from Russian bombing, from Russian aircraft, from an air raid on a theater where 600 women were sheltering. and kids. . I spoke to one of them who escaped, who said he was in half the building and the other half was flattened, including the wing where the pregnant women lived. So it’s absolutely horrible. Some bodies were buried in schoolyards, in front yards, on the side of the road. Others were taken to a mass grave on the outskirts of the city. Some people, I think, are still buried under the rubble.

It is almost impossible to process. You can see a thriving city of half a million people with ports, restaurants, live music, culture, coffee, and now it’s a ghostly ruin. … There hasn’t been anything like this since Guernica, or since World War II.

But it is almost impossible to process. You can see a thriving city of half a million people with ports, restaurants, live music, culture, coffee, and now it’s a ghostly ruin. I mean, really, there hasn’t been anything like this since Guernica, or since World War II. It’s just a throwback to the darker parts of the 20th century.

About Russia destroying the country it seeks to take over

I think Putin doesn’t care much. He just wants territory. And he sees Ukraine as a lost Russian kingdom. I mean, he wrote an essay, if you can call it that, in the summer of 2021, which was posted on the Kremlin website, where he said that Russians and Ukrainians are single people. He traced the history of the Ukraine to suggest that there has always been a kind of spiritual and cultural unity. I think his point of view is that basically Ukrainians can become good Russians or they can be destroyed. And he doesn’t really care what the price is, if that’s what we’ve seen in these pulverized cities, people cooking over open fires amid the ruins. If it means tens of thousands of his own soldiers dying in the process, he doesn’t much care. He’s kind of a dictator on the last leg of him. He is in a strange, messianic realm where what you would consider reason or logic or even some kind of Russian self-interest plays no part at all.

On Russians raping Ukrainian women during the occupation

There is quite compelling evidence that rape has occurred on a large scale. It’s a hard story to tell because obviously a lot of women are reluctant to come forward. The Ukrainian authorities have said, certainly in Bucha, that there was a house where women were kept, about 30 of them, where they were serially raped. … Sexual violence is definitely a part of this.

About the mass looting

Looting is an easier story to denounce because it is everywhere. I mean, you drive into these areas that Russia has vacated and it’s like there’s been some kind of crazy car accident. Every 500 meters, you see cars marked with a “Z,” the symbol of Putin’s invasion, that have been crushed, vandalized, or shot at. You see debris on the side of the road, and you also see abandoned washing machines. The amazing thing is that many of the looting soldiers came from very, very poor rural areas of Russia. And I’ve talked to Ukrainians who say, “My frying pan was stolen, my cutlery was stolen… my laptop and my jewelry.” Really, everyday things, but washing machines seem especially precious to me. … There has been looting, robbery on an absolutely extraordinary scale. And one thing that was also stolen, which is amazing, is the Russians, when they left Kherson in November, they looted the contents of not only the art museum, but also the zoo. And there’s a video of a Russian officer stealing a raccoon from the zoo and taking it to the Crimea.

These soldiers are very young. They are 19, 20, 21, 22, 23. They are young, uneducated boys from very poor backgrounds. And actually, the thing about Ukraine, certainly Kyiv and the surrounding satellite cities, is quite prosperous. Ukrainians generally live better than Russians and, in addition to this intense hatred of Ukraine, which has been fueled by Vladimir Putin and promoted on TV by Russian state channels for a long, long time, I think there is an element of envy that actually Ukrainians have been living. better than the Russians, and that seems to be causing a lot of the chaos and theft we’ve seen.

On Putin’s message to the Russians

[Russia’s] The whole thought, the whole cosmic philosophy, is that they are simply responding to hostile acts committed by the Bad West and America in particular. There’s a phrase in Russian for that… which means “a mirror response.”

And that is why the Russians are not being told that Vladimir Putin unleashed an extraordinary war of aggression on February 24 and is basically trying to conquer a sovereign state and wipe it off the map. The Russians are told that despite the negotiations, despite the proposals, despite the willingness to compromise, the Kremlin has been reluctantly forced to defend its security interests in Ukraine because of American intimidation, hegemony, NATO and because the Americans and their Nazi allies were basically about to attack Russia. It’s upside down earth, if you will.

On how the war in Ukraine could end

Ukraine has proven itself as a state. It is a country. it is a nation. It is an amazing super-organism or collective of citizens all working towards victory. It is not only the soldiers on the front line, but also the old women who make camouflage nets or the students who volunteer or make Molotov cocktails. Sensing that the whole country is fighting against Russia, and also that the Russian plan, which was to take Kyiv in a matter of days, replace the government of Volodymyr Zelenskyy with a puppet administration, and rule Ukraine as a colony from which “Ukrainianity”: language, culture, symbols and monuments were removed. That project has failed. …

I think we’ve really reached the stage where it has to be a military victory. Too many Ukrainians have died. Too many people have been widowed. Too many children have lost their parents. There is no mood within Ukrainian society to cede or even cede any territory. So Ukraine’s position now, after nine months of horrible war, is maximalist. Zelenskyy wants to get everything back, all of his territory. He wants reparations from Russia and he wants those who continued this war, those who launched it. Putin, the people around him, want justice to be done to them, to be tried. And of course Putin, on the contrary, I think he still believes that he can win. He thinks that the West is weak, indecisive, that sooner or later the United States will fall apart and perhaps its allies too. And that if he continues with this kind of volume crushing that we have seen, he will win outright or have a large amount of Ukrainian territory that he can sell as a victory to his national population.

Unfortunately, the corollary of all that is that I don’t see peace. … Unfortunately, the war will continue, and therefore that means that the Western world has to support and arm the Ukrainians until they achieve victory. And that could be a while.

Sam Briger and Thea Chaloner produced and audio edited this interview. Bridget Bentz, Molly Seavy-Nesper, and Nishant Dahiya adapted it for the web.