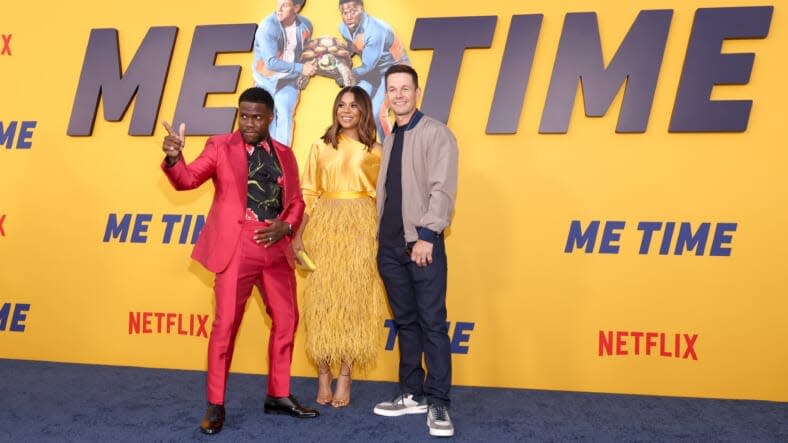 From thrillers hitting theaters to Hulu’s highly anticipated Mike Tyson limited series, theGrio has five things to watch this weekend in theaters and on streaming platforms.

“The Invitation” follows Evie (Emmanuel) who, after taking a DNA test, reconnects with her long-lost family. As she attends her cousin’s wedding in the English countryside, she begins to unravel deep mysteries about her family’s lineage in what is described as a “nightmare of survival.” Emmanuel appears on the latest episode of theGrio’s “Acting Up” podcast this weekend, where she discusses her new project and her career thus far with host Cortney Wills.

She told Wills, “I’ve done a little bit of sci-fi, a little bit of comedy and fantasy and more dramatic roles, you know? And the thriller, the horror stuff that I haven’t really done, and I was really excited to see this story because it was a really interesting way to retell a story that’s been told many, many times in many, many ways, and to place this very old vampire mythology and landscape and then merging it into this very modern context and very modern world and woman.”

“The Invitation” is already in theaters.

John Boyega and the late Michael K. Williams star in this thriller, which hits theaters this weekend and serves as Williams’ final performance. Boyega stars as Navy veteran Brian Brown-Easley, who, upset over the handling of his disability pay, takes a bank and its workers hostage. “Breaking,” based on a true story, premiered at Sundance this year under the title “892.”

At that time, The Grio’s Cortney Wills met with Boyega, who was open about working with Williams, who passed away in September 2021. “Breaking” turned out to be a reunion for the two actors, who worked together on Williams’ first film project. Boyega, “Attack the block.” Recalling her first interaction with Williams, she said, “Michael was someone that … I remember going and buying ‘The Wire.’ from season one to season four and having to watch it in my little flat in south London.”

He continued: “So for me, it was like it was a moment of, ‘Yeah, you know what, we’re colleagues. I asked you to be in this movie and you pulled through, but I’m also learning.’ I’m also taking notes on this brother because this guy is generous and genuine and that’s something I want to embody as well. So it was definitely a blessing to have him in this, but more importantly to have real moments with him.”

“Breaking” is already in theaters.

If supernatural horror or suspense movies are not for you, “Me Time” may be your best choice. A buddy comedy courtesy of Netflix, the film stars comedian and actor Kevin Hart opposite Mark Wahlberg.

Hart plays a stay-at-home dad who finds himself with some “me time” when his wife (played by Regina Hall) decides to take their kids with her on a little spring break, giving him a little relief. While enjoying his time alone, he is reunited with his former best friend (played by Wahlberg), who takes him on a wild weekend that almost shatters his life.

The film is available to stream now on Netflix.

Another pick for fantasy fans, “Three Thousand Years of Longing,” starring Idris Elba and Tilda Swinton, is a big pick in theaters this weekend.

The film comes from the director of “Mad Max: Fury Road” and sees Swinton as an academic who encounters a Djinn (Idris Elba) during a trip to Istanbul. In exchange for his freedom, the Djinn offers him three wishes. Based on the short story “The Djinn in the Nightingale’s Eye” by AS Byatt, the film has received generally positive reviews, with Lindsey Bahr of the Associated Press calling it “a patient and occasionally dazzling fantasy”.

“Three Thousand Years of Longing” is already in theaters.

Outside of movies, this weekend will also see new content to stream on the TV front, the biggest of which is Hulu’s highly anticipated Mike Tyson limited series.

Described as an “unauthorized, no-holds-barred look at the life of Mike Tyson”, the project sees Trevante Rhodes (“Moonlight”) in the title role. The screenplay for the project comes from Steve Rogers, who wrote the Oscar-winning film “I, Tonya,” which took a look at another controversial figure in American sports, Tonya Harding.

Hulu’s synopsis for the show reads: “Focusing the lens on Mike Tyson, the series examines class in America, race in America, media fame and power, misogyny, the wealth divide, promise of the American Dream and, ultimately, our own role in shaping Mike’s story.” Russell Hornsby also joins the series as boxing promoter Don King. Check out the trailer for the series below.

The first two episodes of “Mike” are available to stream now on Hulu.

The post 5 things to watch this weekend appeared first on TheGrio.