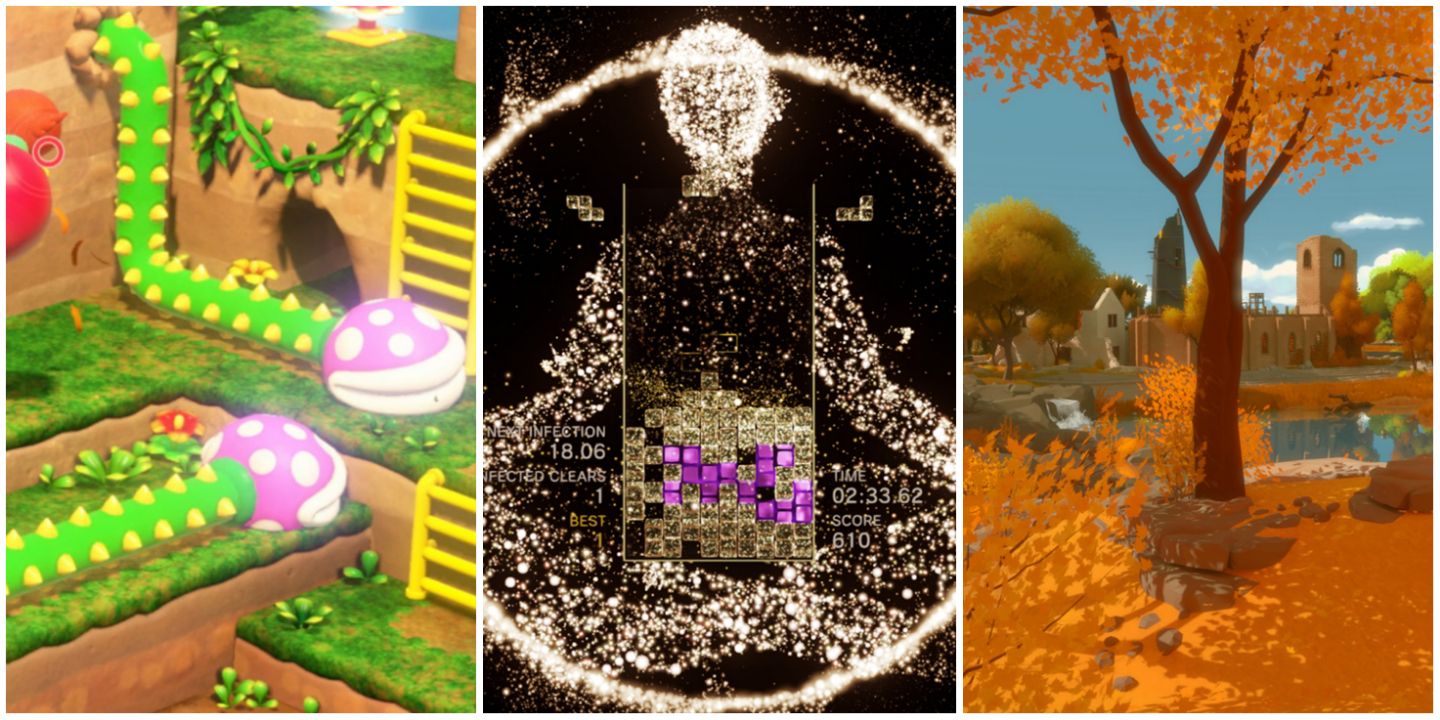 Puzzle video games can challenge players in ways they never imagined they could be challenged. This is done by creating unique mechanics for players to use to solve puzzles or simple mechanics that are intricately placed throughout a game. Some puzzle games are mysterious in every aspect, including their story, while others provide a much simpler story and keep the difficulty in the puzzles they present.

All of these games embrace the puzzle game genre in completely different ways. These games manage to challenge players enough that they want to push through all the obstacles that come their way.

Braid has a platforming mechanic that at first seems very similar to other two-dimensional (2D) platformers, but what it does with this mechanic is very different. It takes the mechanic and adds the ability for players to go back in time at any point in the game, making for some interesting puzzle-solving moments. Each of the new chapters that the game introduces also adds new mechanics to the game that work in relation to time.

The story is also interestingly told as it is told in its entirety backwards. The player never really knows what is going on until the end of the game, when much of the mystery is revealed.

Fez tells the story of the main character named Gomez who tries to fix the world after a hexahedron rips through his 2D plane of existence and reveals a 3D plane. The mechanics are unlike anything most players have seen, as the game allows players to rotate the 2D plane of existence they are on.

Using the plane changes and being able to understand how to transcribe the different Tetris codes placed in the game will allow players to progress through the levels and experience the enchanting story.

Portal 2 takes all the elements that Portal had provided and added some new mechanics to change things up without hindering the initial concept of the game. The different lab rooms where players must use portals to navigate to the exit are still involved along with figuring out how to take out turrets and not die.

The game adds different mechanics by introducing gels that can change how high a player bounces, how fast they bounce, or where they can place portals. The story also remains a hilarious adventure moment worth playing.

The Witness takes the puzzles of the maze and makes them the primary means for a player to explore the map. The game never takes the player’s hand, but it’s also not a frustrating challenge. They have a lot of freedom when it comes to how they end up exploring the island. Everything about the witness feels like a puzzle, even the way the convoluted backstory of him is presented.

The Witness greatly encourages players to learn on their own as it will offer clues to other puzzles through previously solved puzzles.

The Talos Principle speaks deeply about what it means to be a human being. This is an interesting take that is fueled by the fact that the player is a robot. The puzzles in the game will have players using different objects including hexahedrons, laser connectors and much more to navigate through some maze-like areas. Players must solve the puzzles in order to unlock the Tetromino for each level to progress through the game’s story.

The game also features different forms of hazards like bombs and turrets that create a dangerous puzzle experience. It’s a game that rewards patience and those willing to read dense material.

Limbo is a game that has no words but tells a story through its skillful gameplay. Players must be able to navigate through the horrible world of Limbo while discovering the different mechanics that the game throws at the player. There are a lot of really tense moments where players have to learn by mistake.

Players will die a lot trying to figure out what they need to do to advance to the next area. The puzzles will have players figure out how to navigate between giant spiders and buzz saws that will instantly kill the main character. It’s well worth the short playtime it provides.

Catherine deals with a lot of characters who don’t necessarily make the best decisions in life. She’s a slice of life dealing with ethical questions about relationships, which makes her slice of the game feel a lot like a very well-polished dating sim. The game also has a great block-pushing puzzle mechanic involved in the main character, Vincent Brooks’ dream world.

Players must create platforms to reach the top of the towers while avoiding the various traps placed around the giant towers. Different blocks have different properties and there are some really cool bosses sprinkled throughout the game to add intrigue.

The Tetris effect is the perfect refinement of Tetris, bringing back the iconic falling block puzzle that so many people love. The game also adds a lot of art flair to itself, as each of the different areas the game features have unique boards with stages and block styles that are specific to them.

As players progress through the game, there will be unique events that will take place in the game, such as being able to create the bass of a song with each falling block. It is a beautiful reinvention of the original.

It Takes Two is riddled with puzzles that differ from level to level and depending on which character the player chooses to play. There will be puzzles where players can play with sound and others where they can play with gravity. The variety in the different levels is amazing.

As players unlock more of the game, they also come across a story that deals heavily with the concept of reconnection. The story and the respective puzzles are intertwined in the personal growth of the protagonist.

Captain Toad: Treasure Tracker takes a lot of cues from Super Mario and takes away the mobility to make it more of a puzzle game than a platformer, as the character can’t even jump. Players try to collect different gems and stars by exploring the maps that are presented. Each of the levels has different obstacles that players must overcome to try to avoid them and not end up dying.

The way the levels are designed is beautiful as some will have players split into two toads and figure out puzzles like that or go through areas where goo rises up and will kill the player if they’re not quick enough. A lot of time went into creating these wonderfully put together puzzles.

NEXT: The Best Nintendo Wii Games Ever Made, Officially Ranked